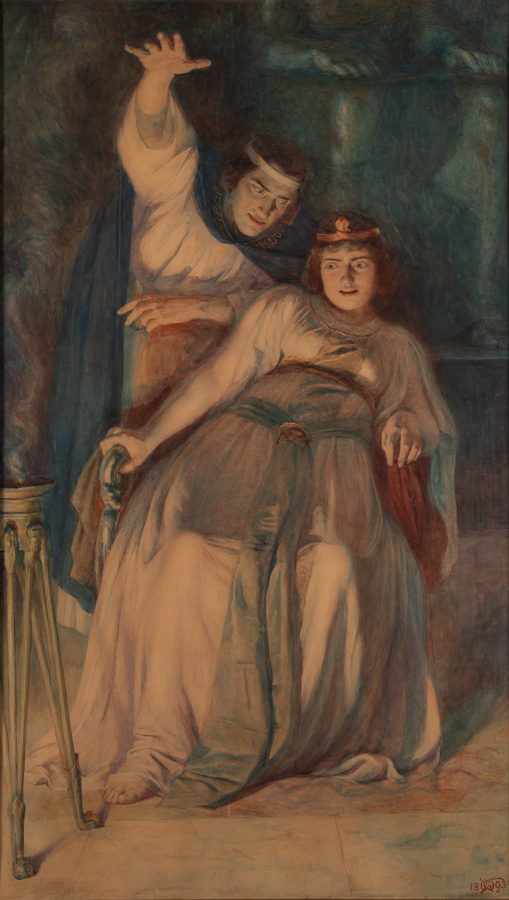 The Incantation , an imposing watercolor by Arthur George Walker (1861-1939), is the first work by the English artist, best known as a sculptor, to enter the French national collections, thanks to the generosity of Mr. Mehdi Korchane.
It dates from the beginning of Walker's career and takes its subject from Cleopatra: Being an Account of the Fall and Vengeance of Harmachis (1889), an adventure novel by Henry Rider Haggard. The high priest Harmachis, descendant of the pharaohs, is charged with the mission of assassinating Cleopatra to restore their dynasty to the throne of Egypt. The Incantationdepicts the moment when he has just been introduced to Cleopatra and conjures up Caesar's bloodied body before her eyes in hopes of becoming the queen's appointed diviner and entering her closest circle. Cleopatra, terrorized by this vision, is transfixed, her eyes frozen on the wisps of smoke rising from the incantation cup.
If this watercolor is not, however, faithful to the scene as described in Haggard's novel, it testifies to an Egyptomania revived in Great Britain at the time of the occupation of Egypt by British troops beginning in 1882.

Despite its undeniable illustrative character, and dear to Victorian art, The Incantation, through its monumentality and artistic references, is also and above all in the lineage of the theatrical portrait. The choice of watercolor for a work of this size and ambition, destined for the walls of the Royal Academy, is not surprising. In England, this technique, which the British claimed as their own, had gained its credentials over the course of the nineteenth century, and was deemed capable of competing with oil painting.
It was, however, into marble that Walker transposed The Incantationmore than thirty years later, which underscores the very special importance this work held for the artist.