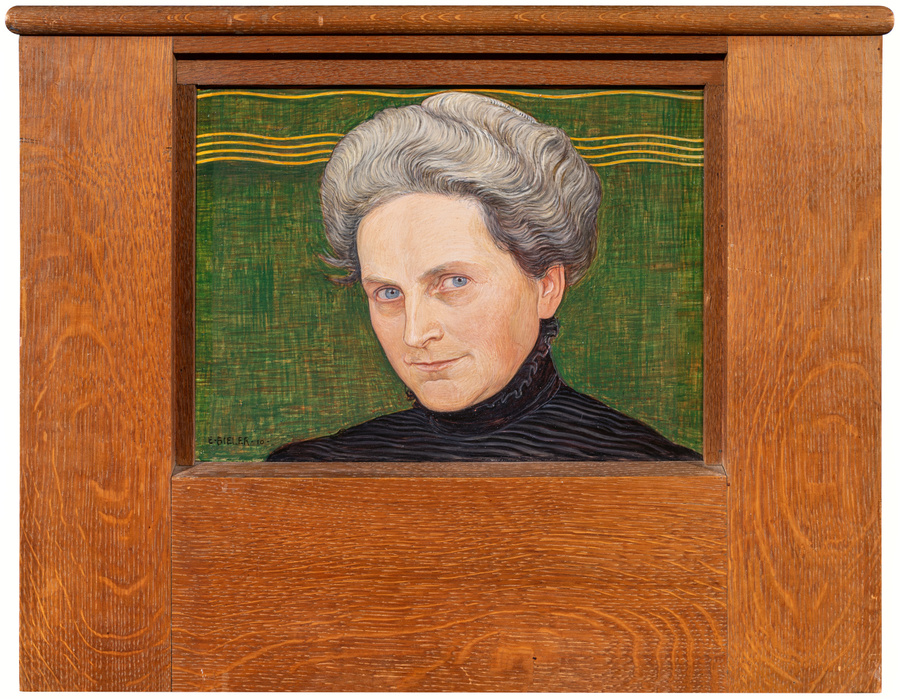 The purchase of this Portrait of Julia Scheller-Erni by Ernest Biéler has enriched the collections of the Musée d’Orsay with a rare work by an important artist, who had not previously been represented in the French national collections.
Biéler was born in Switzerland in 1863 and, at the age of 17, he moved to Paris to study at the Julian and Colarossi academies. In 1892 he returned to Switzerland, and, by the end of the decade, he had become a recognized figure of the Symbolist and Jugendstil, or Swiss Art Nouveau, movements. In the early 20th century, he glorified, with a certain realism, a Switzerland he saw as unchanging and timeless, first painting scenes of country life then a series of sometimes charming portraits of the people of Valais, called “têtes valaisannes”, where he concentrated particularly on their facial features, and any objects and items of clothing that displayed typically regional characteristics.

This portrait reflects a new development in Biéler’s work. It portrays Julia Scheller-Erni, a member of Zürich's bourgeoisie. Biéler did not hide the signs of age on his 53-year-old model’s face, delivering a straightforward, no frills portrait. Here his aim was not so much to convey social status as to reveal her personality: the artist portrays a woman who appears strict yet whose eyes are full of mischief. Painter and model seem connected by a certain dialog, a certain complicity even.

Tired of being seen merely as a champion of regionalism, Biéler began to paint modern portraits on commission. More importantly, he returned to Paris to try his luck once again. From 1906, he used these portraits of his contemporaries to try a new style of painting, which he called “graphism”. It was characterized by its decorative detail, sinuous lines, light, mat palette, and, above all, by its rejection of oil for egg tempera. The Portrait of Julia Scheller-Erni is the perfect example of this collection of portraits so typical of Biéler’s art.

This preference for pared-down, pure lines and the tempera technique played to a primitive aesthetic that was very popular both in France and in Europe as a whole. The contrast between this aspect and the portrayal of a woman of her time adds to the interest and profound originality of this portrait.
We can also see a clear desire for stylization, particularly in the interplay of correspondences between the different wavy lines (clothes, hair, background), that extend beyond the actual painting. Bieler saw his portraits as objects and each picture as a whole. This is why he designed and made their frames himself, as here, using plain borders to set off the elegance of the painting.

Combining ultra-realism and abstraction, Portrait of Julia Scheller-Erni is a striking, powerful work.