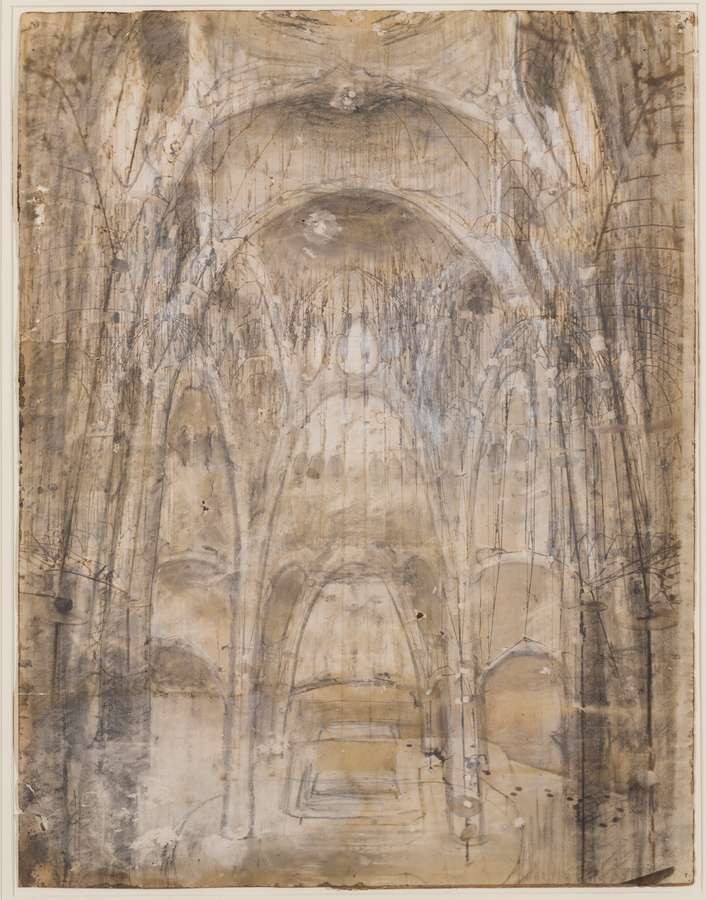 Antoni Gaudí (1852-1926), architect and ingenious creator, made his mark on Spain at the turn of the 20th century and continues to fascinate today. For the first time in fifty years in France, a large-scale exhibition, "Gaudí", is devoted to this master of Art Nouveau from 12 april to 17 july 2022, at the Musée d'Orsay. Élise Dubreuil and Isabelle Morin Loutrel, curators of the exhibition, answered a few questions.

Why is Gaudí so often associated with Barcelona?

Isabelle Morin Loutrel and Élise Dubreuil – Gaudí is first and foremost synonymous with the intriguing Sagrada Família basilica, and the Sagrada Família is a symbol of Barcelona. The city also embodies Modernism (Catalan Art Nouveau) through the unique  architecture and extravagant buildings that line the Ensanche avenues – the urban development that appeared from 1860 on, based on the plans of engineer Ildefons Cerdà. The best-known is the Passeig de Gràcia, home to buildings by Josep Puig i Cadafalch, such as the Casa Amatller, and by Gaudí, such as the Casa Batlló and Casa Milà. In the medieval city another architect, Lluis Domenech i Montaner, built his elegant Palau de la Música Catalana concert hall, while Gaudí designed the Palau Güell for his patron, Eusebi Güell. Gaudí fostered close ties with the ground-breaking architects much beloved by Catalonia’s high society. He is intricately linked to Barcelona itself because from his student years at the age of seventeen until his death in 1926, he practically never left the city. His buildings are almost exclusively located there and the cathedral, which took up a full fortythree years of his working life, is still being built, making Gaudí a living symbol of Catalan identity.

What training did Gaudí have?

Isabelle Morin Loutrel and Élise Dubreuil – Gaudí studied at the Barcelona School of Architecture, which was established just before he arrived in 1869 and was directed by Elies Rogent i Amat, an architect with academic training but an openness to the innovative ideas of Eugène Viollet-le-Duc. Gaudí immersed himself in books from the school library, in particular the Dictionary of French Architecture from the 11th to the 16th Century (1854) by Viollet-le-Duc and works by English scholars such as the art critic John Ruskin and architect Owen Jones. Gaudí did not excel in classical studies, emerging as unique in his approach very early on. His head of studies was sceptical, noting that “either he is a genius, or he is mad” upon awarding him his diploma in 1878. As soon as he had completed his studies, Gaudí set about working and training under high-profile architects such as Francisco de Paula del Villar, who was originally assigned to the Sagrada Família project, Josep Fontséré, the brain behind the Ciutadella park, and Joan Martorell, his teacher. He was undoubtedly also inspired by many illustrations and postcards: although he did not travel, he kept abreast of what his peers were accomplishing across Europe. He was as well versed in Mudéjar and Mozarab art (Christian art inspired by Muslim art in Spain) as he was in Baroque art. 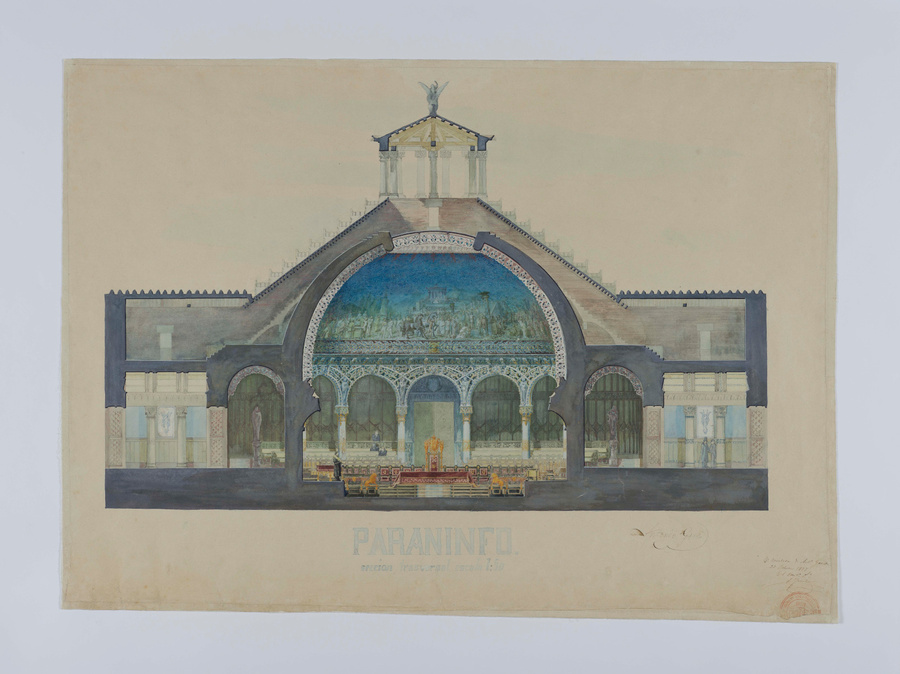 Isabelle Morin Loutrel and Élise Dubreuil – Gaudí belonged to Barcelona’s generation of architects who founded and drove Catalonia’s Modernism movement, including Lluis Domenech i Montaner and Josep Puig i Cadafalch. Trained in the 1870s and 1880s, these architects began working at a time when all European cities were deeply reflecting on what features a modern city might have. Many supported the idea of a new style that would be adapted to contemporary living. The decades leading up to this had been characterised by eclecticism, a tendency to mix and match influences and references from the past, which was to give way to a new form of architecture and decorative approaches with an internal sense of cohesiveness: ‘neo-styles’ were cast aside in favour of a refined, Japanese-inspired aesthetic featuring natural shapes and references to scientific breakthroughs. All the figureheads of Catalonia’s brand of Modernism drew on these features, lending them their own individual twist: within this same movement, different aesthetic sensitivities abound. In the same way, the all-encompassing Art Nouveau movement that swept across Europe allowed for a diverse range of artistic expressive forms that sometimes clashed, from the arabesques of Barcelona, Paris and Brussels to the linear styles of Vienna and Glasgow. This diversity lies at the heart of Art Nouveau’s richness and allowed atypical architects such as Gaudí to flourish.

What were Gaudí’s most striking architectural innovations?

Isabelle Morin Loutrel and Élise Dubreuil – Gaudí’s architectural innovations stem from his all-consuming desire to achieve structural balance (by evenly spreading load through load-bearing parts to prevent rupture and deformation), combined with his taste for rationalism (in which form lends function). His work shows some consistent features: although he did not invent the parabolic arch, he made ample use of it when designing the Palau Güell with its two sweeping arched entrance doors. He also integrated the arch in the corridors that form the cloister at the Colegio Teresiano, and again in the apex of the brickbuilt Casa Milà eaves. The arch sweeps down to the ground and distributes weight evenly and continuously while creating an enveloping atmosphere of closeness. The effect is one of solidity and suppleness all at once.

Another of Gaudí’s characteristic features is his tendency to elevate his vaulted ceilings high up without using flying buttresses or external buttresses. His passion and knowledge of geometry and mathematics is reflected in his buildings, alongside his acute observation of the natural world, and trees in particular. Tilted columns emerged from this, becoming a new quirk of his style. Building his columns in such a way allowed him to fine-tune load-bearing at the precise points where they dip. A clear example of this is in the crypt of the Colònia Güell, in the galleries of the Park Güell, and at the Sagrada Família. Gaudí also broke new ground with the use of work tools such as the ‘polyfunicular’ model: a series of chains and lead shot bags that replicate how weight is distributed and could be photographed, with the image inverted to reveal the shape of the arches. The vaulted ceiling at the unfinished Colònia Güell church was intended to be designed in line with this principle. Finally, Gaudí worked with natural materials such as wood, iron, stone, and brick, all of which he remained loyal to and preferred over the reinforced concrete that was becoming increasingly widespread.

Despite this, he did use a type of concrete for the Casa Milà, a kind of “artificial stone” that allowed him to imagine the interior as a “blank space” devoid of any supporting elements. This spatial structure in which the rooms follow on from one another freed from the restrictions of walls resulted in unprecedented honeycomb-style interiors.

Gaudí also used shape in an innovative way, with roofs, façades and railings traced out like waves: supple, unbroken, winding lines that transform architecture into art, creating the sense that the surface exists independently from the structure, despite the exact opposite being true. In this, Gaudí applied Viollet-le-Duc’s rationalist theory.

Did Gaudí’s initial projects of religious architecture inspire his work on the Sagrada Família?

Isabelle Morin Loutrel and Élise Dubreuil – Gaudí aspired to design a “Great Church” from the moment he completed his architecture studies in 1878. He wrote ‘Hornementation’, an essay exploring the links between architecture, its decorative aspects, and its functionality, in which he lambasted the Paris Opera house and the Sacré-Coeur in Montmartre. His experimentations began with the church in the Colònia Güell (an industrial complex containing housing for workers designed by Eusebi Güell), which was to pave the way for the Sagrada Família. Work started in 1908. The church was meant to feature a large crypt preceded by a multi-level porch, but construction was suspended in 1917 when Eusebi Güell fell ill. For this project, Gaudí used the polyfunicular model he had invented, which led to his iconic ‘pill shapes’, visible on a photograph touched up with charcoal and highlighted in white. Restoration work on Mallorca’s cathedral was another highpoint in Gaudí’s career, even if his contribution was only limited to redesigning the choir and its furniture. The architect was assisted by Josep Maria Jujol, his colleague and disciple, who injected ground-breaking decorative features such as touches of colour in the choir stalls. Together they elevated the furniture and fittings, using a scattered array of pieces as if crafting ephemeral artworks, such as the chandelier made from metal, fabric and wood.

What principles were applied in continuing work on the Sagrada Família, Gaudí’s ultimate and unfinished masterpiece?

Isabelle Morin Loutrel and Élise Dubreuil – Gaudí picked up where his predecessor, Francesc de Paula del Villar, left off, starting with the Neo-Gothic crypt above which the main section of the Sagrada Família was designed: a vast nave in the shape of a Latin cross with double aisles, and three sweeping façades depicting the Nativity, Passion and Resurrection. Aware that work on the cathedral would not be finished before his death, Gaudí decided he would build a façade in full – that of the Nativity, with a total of three doors and the neighbouring towers and walls. Around it was a built-in cloister forming a wall, with a dome positioned at each angle. The architect prepared plans for the Passion façade, which was constructed after his death and features the inclined columns that serve as a testimony to the experimentations that took place at the Colònia Güell. Work began on the Passion façade in 1954 based on a drawing from 1911, yet nevertheless feels very different in style from Gaudí’s aesthetic due to the 1980s sculptures by Josep Maria Subirachs. The cathedral is elevated with the eighteen towers Gaudí had planned, complete with columns on the inside that branch out to bear the weight just as the architect had intended, as evidenced by what remains of the models he had created, which were damaged in the fire of his workshop in 1936. From the 1950s on, the engineers and architects who worked on the project believed that what they had gleaned from the rare few drawings that remained, and the elevations seen on the Nativity façade, was enough to set about building what Gaudí would have wanted. The exhibition does not cover this sensitive topic due to the lack of archive material and writings from Gaudí. This is a subjective matter leaving each one free to make up their own mind.

What was Gaudí’s project for New York, and why was it never finished?

Isabelle Morin Loutrel and Élise Dubreuil – Not much is known about Gaudí’s plans for New York. The drawings available to us are from the 1950s and were made by the sculptor Joan Matamala, the son of one of the architect’s close colleagues, and by Ignasi Brugueras. Legend has it that a New York patron caught wind of Gaudí’s work and wanted to commission him to build a hotel that would include reception rooms, conferences, and other ‘attractions’, hence the proposed name: Attraction Hotel. The shapes of the towers are strangely reminiscent of those of the Colònia Güell church and the Sagrada Família. Over-sized and extravagant, the building was designed in gigantic proportions, making it more of a vision than a realistic idea. It is also an example of Gaudí’s ‘genius’ harnessed and reworked by an artist evidently fascinated by the architect’s work, pointing to the way in which Gaudí’s architecture, which draws international crowds to Barcelona, continues to feed into our collective imagination and sense of wonderment today.