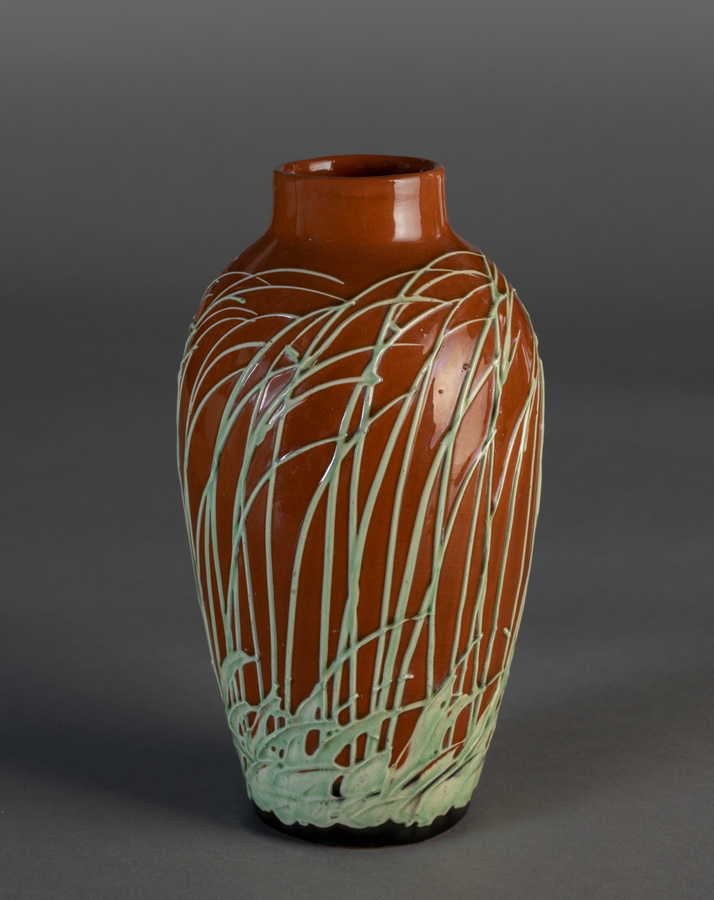 Max Laüger (1864-1952) was a turn-of-the-century decorator and ceramist active in Germany's Baden-Württemberg region. After initial training at the Kunstgewerbeschulein Karlsruhe, in the painting and decoration department, he traveled around Europe and attended the Académie Julian in Paris, among others. At the end of the century, he took over the artistic direction of the Tonwerke ceramics factory in Kandern, in parallel to his personal work. In a few years, he developed an easily identifiable style that earned him a certain success. On vases with simple forms, which he rotated, he applied a plant-inspired decoration in light relief, covered with a lead glaze. To create it, he used a technique of painting with a Malhorn, named after the tool which allowed him to draw on the vase with the help of colored slip casting.

An internationally-recognized artist, Laüger exhibited his works in Paris, at Siegfried Bing (the Art Nouveau), Julius Meier-Graefe (the Modern House), among others, and in the Universal Exhibitions in Paris, in particular that of 1900. His vases were also sold in Germany, in the Austrian empire and in the United States, in particular after the St. Louis World's Fair of 1904. As co-founder of the Deutscher Werkbund in 1907, he thereby testified to his commitment to the renovation movement of the decorative arts specific to the German Jugendstil.
He nevertheless remained an artist rooted in his native province, which was expressed both in the organization of his production and the sources of his inspirations. Originally from this region of southern Germany, he lived and worked a few miles from Switzerland and Alsace. He was clearly inspired by the traditional ceramics of Switzerland, and the southern Black Forest, in the colorful range of glazes and the decorative principle that runs in a frieze around the vase body. Nevertheless, he offered a reinterpretation of this vernacular aesthetic, between stylization and ornamentation.

The vase that the Musée d’Orsay had the opportunity to acquire thanks to the generosity of the Société des Amis des musées d'Orsay et de l'Orangerie  is quite representative of Laüger's work in the last years of the nineteenth century. With a rather sober baluster shape, it is animated by a decoration of stems in the wind which spreads all around the vase’s body. The base of the vase is simply marked by a darker color, an almost black-purple, which provides contrast and anchors the design. The bottom of the vase is a seductive brick red, which contrasts with the delicate pale green of the stems above. This color is obtained by the play of the clear paste with which the stems were drawn and the very pale green translucent glaze which covers it. Some slight variations in the thickness of this glaze give relief to the design.

This vase now completes the presentation of Laüger's work at the Musée d'Orsay, offering a chromatic range and a type of decoration never before represented in the collection.