New rooms Paris, the capital of a modern nation 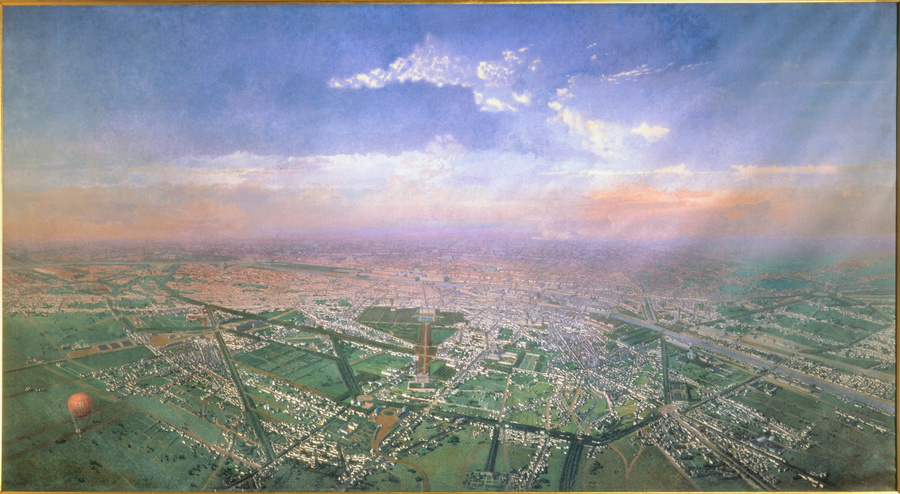 New rooms « Paris, the capital of a modern nation »

A new thematic space devoted to the development of Paris during the Second Empire brings together paintings, drawings, models and sculptures around Victor Navlet's large scale canvas, General view of Paris, taken from the Observatory, from a balloon (1855) and Charles Garnier's Opera House.
Opening on May 24, 2022.

Paris, the capital of a modern nation

In the 19th century, European cities embarked on a programme of modernisation in a spirit of imitation and competition. Under the Second Empire (1852-1870), Napoleon III was keen to make Paris the prestigious capital city of a powerful State, on a par with London.
He appointed Georges-Eugène Haussmann as Prefect for the Seine in 1853, and tasked him with implementing this transformation. The centre of the old city was completely reconfigured with the creation of a number of thoroughfares to facilitate the flow of people and goods. The engineer Eugène Belgrand improved sanitation in Paris (water supply system, sewerage), and green spaces were created. The city expanded.

There was industrial activity in the city and new materials such as steel could be seen in its architecture. The appearance of the “new Paris” was based on historical continuity, the timeless presence of the Seine, and technical advances. The Empire’s policy of focusing on prestige was also evident in the construction of a new opera house, a lavish monument in the heart of a district created for business and luxury. The Third Republic pursued this redevelopment programme.Artists cast a picturesque eye on the old city or celebrated the modern metropolis. Millions of visitors flocked to the five universal exhibitions organised in Paris between 1855 and 1900.

Paris - a social focus and a commitment to building

The redevelopment of Paris can be ascribed to political, security, economic, speculative, health and social motives. The creation of urban thoroughfares, which began under the Second Empire with the extension of the rue de Rivoli to the Hôtel de Ville (City Hall), continued under the Third Republic. Many districts were building sites for several decades and hundreds of residential apartment blocks were erected by private property development companies. There were new ideas for public buildings, such as barracks, schools, libraries, town halls, hospitals, and prisons.

At the Universal Exhibition of 1889, the architect Lucien Magne traced the development of French architecture in a remarkable series of drawings by his fellow architects for buildings to meet the needs of a modern society, or for the restoration of historic buildings such as Notre-Dame cathedral. French architecture was held in extremely high esteem abroad and architects produced innovative designs for community buildings such as the dispensaries built by Paul Blondel in Mulhouse and then Paris. Cutting-edge techniques and processes were used to construct public buildings and restore iconic Parisian monuments.

Paris has a long industrial history which was reflected until the mid-20th century in the existence of a multitude of workshops and small factories, especially in the northern suburbs, but also in older districts such as the Marais, for example. As industry developed, however, these noisy activities which created pollution, mainly by burning coal, required ever more space and moved out to the suburbs.

Despite the expansion of the railways, river transport was still the most efficient and cost-effective way to move raw materials and goods. The Seine therefore played a key role in supplying the capital and many views show the bustling quays. Old wooden and stone bridges were widened or rebuilt using iron and steel, which were lighter and stronger.
Metal architecture was one of the great innovations of the 19th century. Iron, which remained hidden for so long, became a legitimate construction material and was left exposed in many buildings, notably covered markets and stations.

A picturesque view of Paris

The picturesque movement, which was born in Britain in the 18th century, reached France in the early 19th century and extended into Romanticism. It showcased sites which were still protected from the accelerated passing of time associated with modernity. Medieval monuments, and cathedrals in particular, took pride of place, as did bridges, and also utilitarian buildings from every era, and working-class suburbs, some of which had retained a rural aspect.
The picturesque gaze was interested in the remnants of tradition and districts untouched by modern straight lines. Ordinary working-class characters, inhabitants and workers were often depicted going about their everyday activities.

The development of illustrated publishing in the 1820s in the form of magazines, or works such as the Voyages pittoresques et romantiques dans l’ancienne France, published between 1820 and 1878, fuelled the vogue for this artistic and cultural movement. Among the pieces from his collection gifted by Dr Eduardo Mollard to the French State in 1961 and 1972 are a group of first-rate impressionist works and also paintings following in the footsteps of Corot, which reflect a picturesque and intimist approach to Paris (Jongkind and Lépine).

One of the main modernisation projects in Paris launched by Napoleon III was the construction of the Nouvel Opéra, designed to replace the obsolete Salle Le Peletier opera house. Much to everyone’s surprise, the competition launched in late 1860 was won by an unknown young architect, Charles Garnier.His project convinced the Emperor and the jury with its clear composition, generous proportions, and lavish decor. This spectacular building was markedly at odds with the understated facades of Haussmann’s buildings and their trademark straight lines.

Work began in the summer of 1861 and the facade was inaugurated at the Universal Exhibition of 1867, but progress was interrupted by the Franco-Prussian War. The fall of the Second Empire could have sounded the death knell for this monument which was so closely associated with Napoleon III, but the new Third Republic decided to take ownership of the project and bring it to fruition.The Palais Garnier, as it was called in honour of its architect, was inaugurated in 1875, and swiftly became a template for a new generation of entertainment venues worldwide.