In this bicentenary year of the birth of Rosa Bonheur, what are the main aims of this exhibition organised with the Musée des Beaux-Arts de Bordeaux and in a special partnership with Rosa Bonheur’s château?

Leïla Jarbouai and Sandra Buratti-Hasan – The aim is to allow visitors to gain an overview of Rosa Bonheur’s work as there has not been a retrospective since the exhibition in Bordeaux in 1997. Furthermore, published work in French on the artist is scarce, and there is no catalogue raisonné. Rosa Bonheur is known for her extraordinary life and personality as a liberated woman who was able to wield her brush to make her mark in a very male-dominated world and to become a star of animal painting. When she is viewed specifically through this biographical lens, her work is overshadowed or only seen in a fragmented way. In 2019, her drawings were exhibited at the Musée d’Orsay, which has a significant collection of her works on paper, and numerous studies in oil can be seen at the Château de Fontainebleau and at the Château de By at Thomery in Seine-et-Marne, where the artist lived. But with the exception of a few masterpieces, mainly from collections at the Musée d’Orsay and the Musée de Bordeaux, there have been few opportunities until now to see her most accomplished paintings, which are scattered in various private collections and museums in the United States and Europe. We were keen to present an insight into the complexity and richness of Rosa Bonheur’s work and to place the accent on drawing, which is the cornerstone of her practice.

In 1848, Rosa Bonheur received a commission from the Second Republic, which would become Ploughing in the Nivernais. What impact did this work have on her career as a painter?

Leïla Jarbouai – This large painting in a quasi-panoramic format, inspired both by monumental friezes and history paintings, depicts a subject which is rural and political (it valorises the terroirs and agricultural wealth of the French Republic), but also has a universal appeal. To quote Rosa Bonheur, ploughing creates “the furrows which produce bread to feed the whole of humanity”. As preparation for this ambitious painting, she carried out fieldwork in the Nivernais, where she observed animals, methods for yoking teams, farmers, and the land itself which played such a major role in her painting. Then, in her studio, which was in Paris at this time, she developed a highly structured composition with a double diagonal. The blue sky, the dynamic slanting procession of oxen and the land coexist harmoniously. However, she reverses the balance of power between humans and animals. The farmers in the background are almost blurred, and all of Rosa Bonheur’s attention is focused on the fine detail of the oxen. We can identify three different breeds, two of which are now extinct, so the painting provides a valuable record of the diversity of animals now under threat from the standardisation of livestock species and the pursuit of profit. The entire painting revolves around a central focal point: the eye of the Charolais-Nivernais ox, which draws our attention and challenges us. Who is truly working the land? Is the artist depicting the silent revolt of the animal kingdom? The painting was the success story of the Salon of 1849, becoming one of Rosa Bonheur’s most famous works and earning her the accolade of being the finest animal painter of her time. 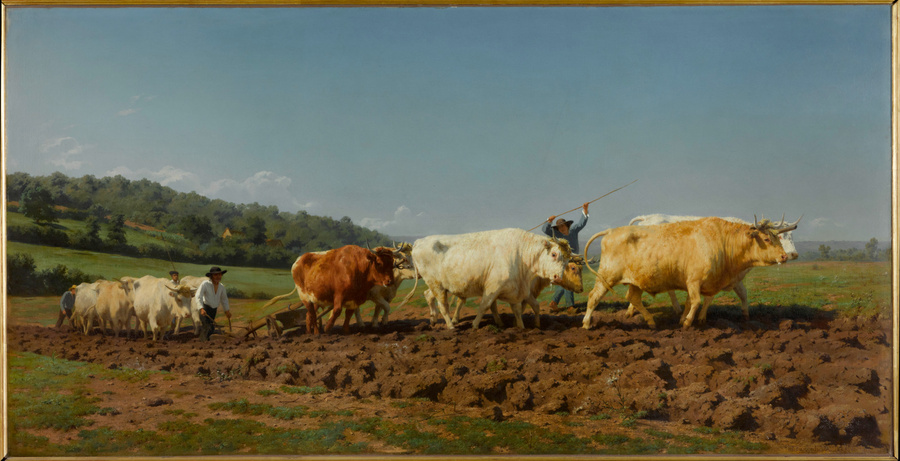 Does Rosa Bonheur have a unique approach to animal art?

Leïla Jarbouai – Yes, and this is what makes her art so powerful and original. She is part of a pictorial history and tradition through her study of the old masters at the Louvre, and in particular the Northern Schools and Flemish and Dutch painters. She favoured a smooth paint treatment to create a depiction which is illusionist in its precision. But if we look closely at her paintings, she uses areas of impasto to add texture to earth, bark, and animals’ coats. She plays with different degrees of precision, leaving some areas more indistinct and adding detail to others. What is most original is her approach to animals. Whereas many animal painters lived with animals, few surrounded themselves with such a diverse array of species and communed daily with living creatures to such an extent. She worked in 1850 Makes the first of several trips to the Pyrenees with Nathalie Micas. 1853 She shows The Horse Fair at the Salon. 1854 A sales ledger kept by Nathalie Micas features the names Gambart, Tedesco and Goupil, three picture dealers who became Rosa Bonheur’s official dealers. 1855 At the Universal Exhibition in Paris, Haymaking in the Auvergne is awarded a gold medal and enters the collection of the Musée du Luxembourg in Paris, a museum for a living artists at the time. She stops submitting paintings to the Salon as: “Such was the enthusiasm of Monsieur Gambart and the Tedescos that they could barely wait for my works to be finished before shipping them off to England, and especially to America”. She makes 6 2 situ from wild or semi-wild animals; this differed significantly from painters who studied taxidermy specimens or passive animals with glazed expressions in menageries. Rosa Bonheur sought to engage and interact, there is a reciprocity between the painter and her models, who are also her muses and friends. Lastly, she rejected the anthropomorphism of Desportes (1661-1743) for example, who painted a “cunning and clever fox”, Oudry (1686-1755) who celebrated the “maternal instinct” of the brood dog (a female gun dog used for breeding), and even Landseer (1802-1873), whom she admired. Rosa Bonheur exhibited a marked respect for the radical otherness of these unusual and sensitive beings and did not feel the need to humanise them.

Does drawing, at which was Rosa Bonheur was a virtuoso, simply facilitate her painting?

Leïla Jarbouai – Drawing is at the heart of the life and work of Rosa Bonheur. It is her first language, her primary means of expressing and transcribing the world. She recounts how she could draw before she could write. Later, drawing was directed towards painting. Her father, who was keen to provide her with the very finest training, pursued the academic route: first learn to handle a line, then move on to painting. Rosa Bonheur, who took on the running of a Free School of Drawing for Girls in Paris, would repeat to her students: “Before picking up paintbrushes, master your pencil and become good at the science of drawing”. This was a traditional manifesto but also a feminist one, as drawing was associated with science and knowledge and allowed women artists to become part of the illustrious line of descent stemming from the Masters of the Renaissance for whom drawing was fundamental, a model for the other arts, and a means of understanding. Furthermore, through drawing, Rosa Bonheur built up a huge repertoire of the living world. This ensured that her painting was always true to the specific time which produced it; it bears the traces of a moment in her life, of a precise encounter between the artist and her model. An animal she draws is not depicted in a fixed pose, but captured from different angles. The drawing reflects the time spent with the animal. On the subject of her lioness, Pierrette, Rosa Bonheur confided to the painter Anna Klumpke (1856-1942), who was also her biographer: “I have drawn her on a number of occasions and so she has got used to seeing me and has become more and more affectionate towards me”. The quality of the relationship was built through drawing. 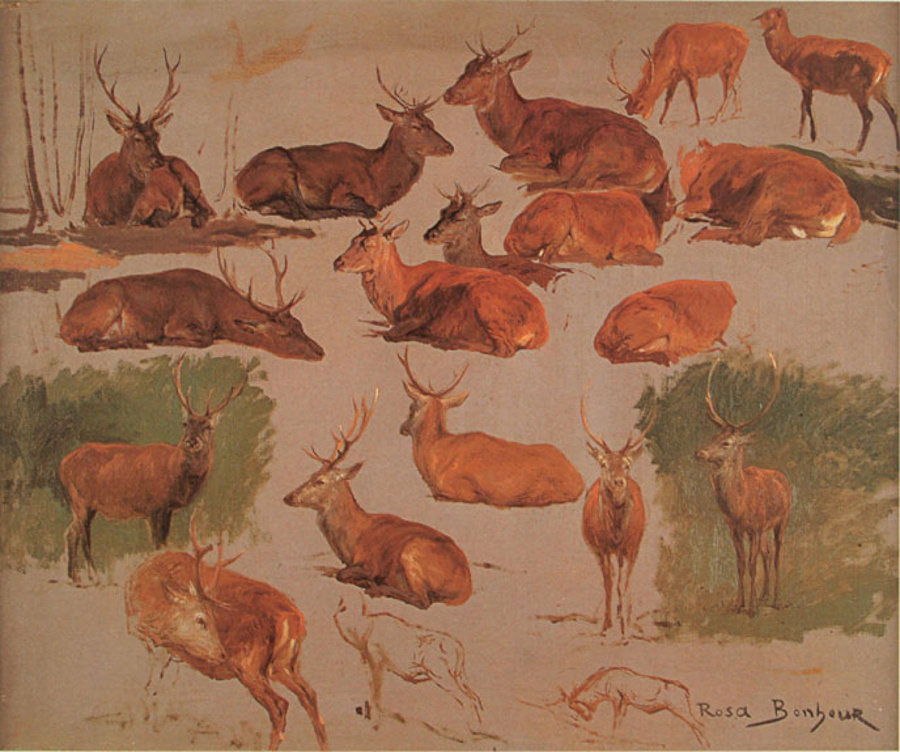 One section of the exhibition is devoted to Rosa Bonheur’s studio at the Château de By in Thomery. What was her working method there?

Leïla Jarbouai – The sketches and drawings which Rosa Bonheur considered to be her finest work can be seen throughout the exhibition tour. The huge popularity of The Horse Fair and of her works in general meant that in 1859 she was able to purchase an estate on the fringes of Fontainebleau forest, the Château de By in Thomery. It was extremely rare in this era for a woman of humble origins to become the owner of a property bought with the fruits of her labour. Rosa Bonheur was keen to distance herself from prying eyes and to get closer to nature. She settled at By in 1860 with her friend Nathalie Micas (1824-1889), Nathalie’s mother, and numerous animals. She lived and worked there until her death in 1899. She produced candid drawings in the grounds 1862 Rosa Bonheur is elected a member of the Milan Academy of Fine Art, and a member of the Pennsylvania Academy in Philadelphia and the Society of Belgian Artists. 8 June 1865 Empress Eugénie travels to By to present the 43-three-year-old painter with the Légion d’honneur, declaring that “genius knows no gender”. 1867-1888 Rosa Bonheur takes part in the Universal Exhibition in Paris (1867). King of the Forest is exhibited in Antwerp (1879). She develops a passion for forest fauna and wild animals and even keeps some at the Château de By. Lions at Home is exhibited in London and presented to Queen Victoria and then to the Prince and Princess of Wales (1882). 1889 The artist’s partner Nathalie Micas dies. Now aged 67, Rosa Bonheur develops a passion for Buffalo Bill’s Wild West 5 of the property of dogs, horses, sheep, goats and more unusual animals such as izards, sows, deer, lions, and lionesses. She could study her models’ behaviours and earn their trust. Rosa Bonheur also painted in watercolours in the forest where she walked every day. She had a studio installed in the property, which she called her “sanctuary”, a place where she could paint pictures from studies often produced long before the move to By. For example, she brought back a number of studies from her trip to Scotland in 1856 which she used in later decades to create large compositions. This also applied to her studies from the Pyrenees. She stored the studies in large art folders classified by animal and plucked out subjects as and when she wanted to paint them. In this “sanctuary”, she painted under the watchful eye of the animals she had loved which were stuffed when they died. Their glassy stares looking down at her easel served to remind her of her duty to depict them faithfully in her paintings. 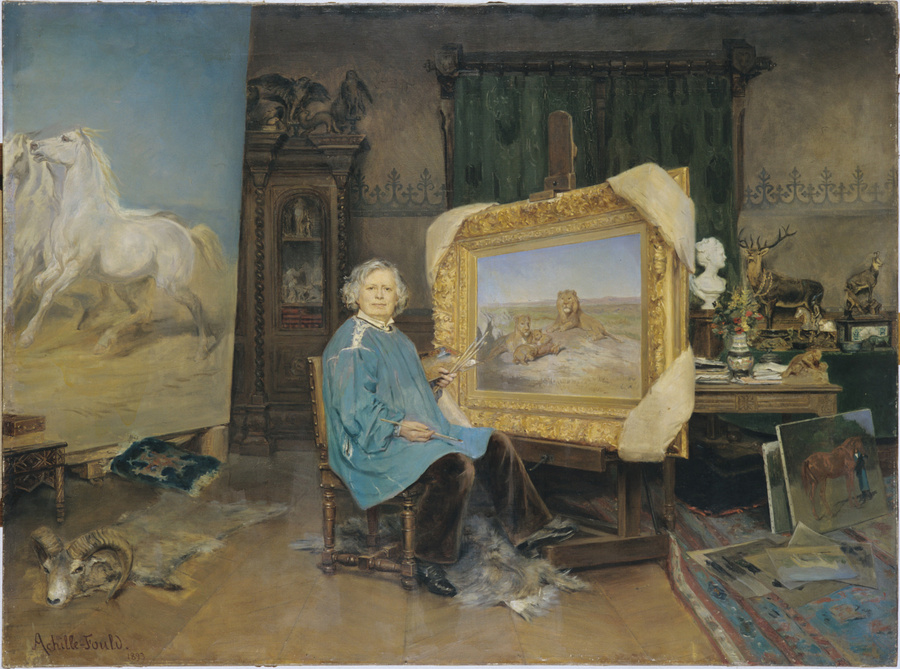 Could we describe the relationship between the United States and Rosa Bonheur as a mutual fascination?

Sophie Barthélémy – Absolutely. Although the United States remained a dream and a fantasy for Rosa Bonheur, who was never able to travel there, the artist’s lifelong admiration for this young nation which was still undeveloped knew no bounds. As a symbol of the New World and a land of freedom and female emancipation, the North American continent inevitably cast its spell over this painter in pursuit of independence. Colourful works by the famous painter George Catlin (1796-1872) revealed to her at a very early point the wild beauty of the Great Plains of the American West and the harmonious relationships between indigenous communities and local fauna, notably bison. Her legendary friendship with Buffalo Bill and the performers in his Wild West Show, which came to Paris in 1889, the year in which she met Californian painter Anna Klumpke, set the seal forever on this love of all things American. Americans blazed the trail as ambassadors for Rosa Bonheur, who even during her lifetime was more famous on the other side of the Atlantic than in France. Her works, which were widely disseminated as prints and in the illustrated press, found highly lucrative outlets on the American art market. The Horse Fair was gifted to the Metropolitan Museum of Art in New York in 1887 by the billionaire Cornelius Vanderbilt II. 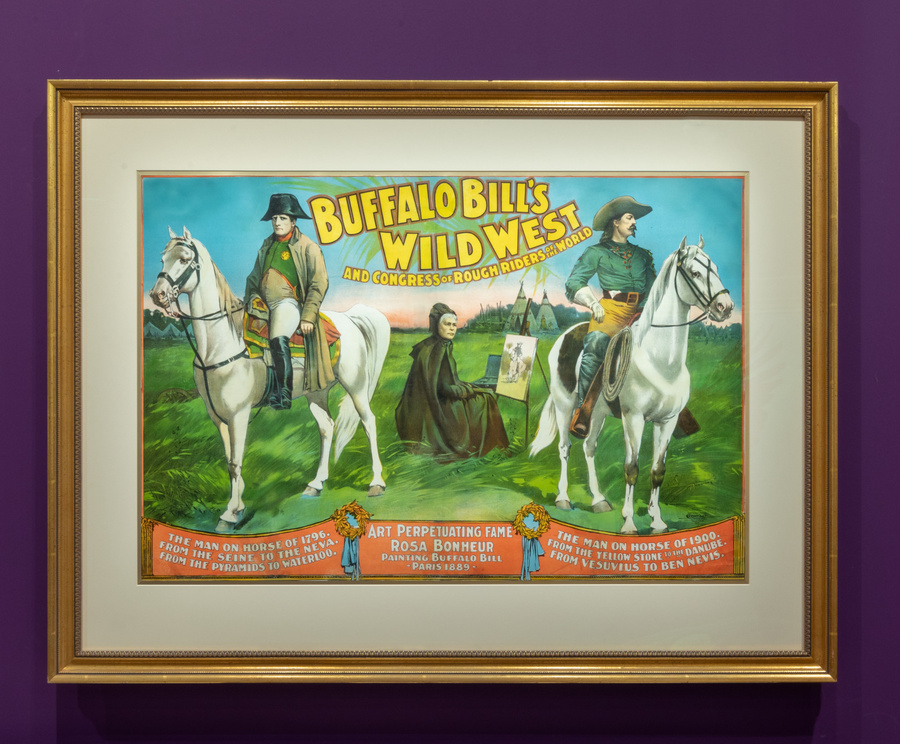