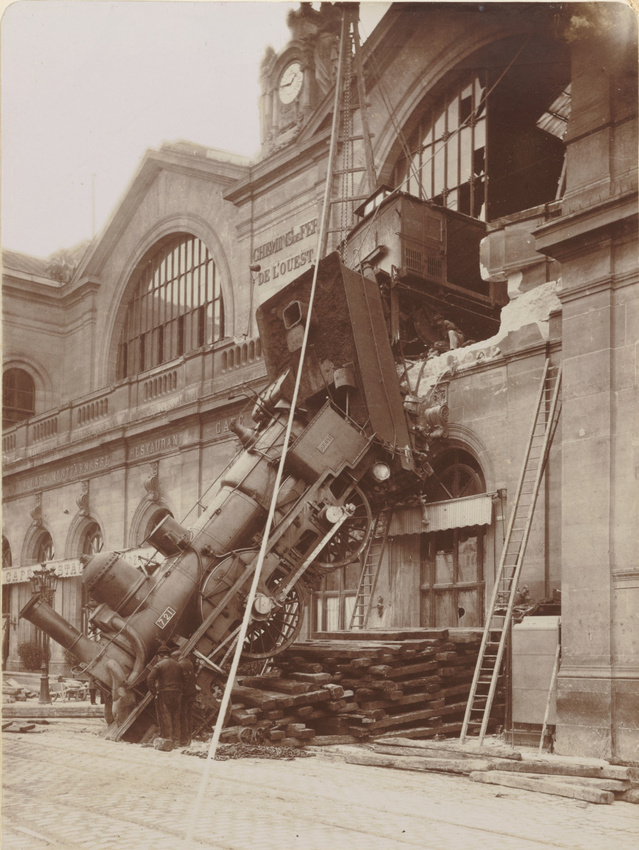 On 22 October 1895, there was a particularly spectacular railway accident at the Gare de l'Ouest, later re-named the Gare Montparnasse. The 26 October issue of L'Illustration reported the event as follows: "The No.56 train arriving from Grandville hurtled into the station at a speed of 40 to 60 kilometres an hour, and, unable to stop, ploughed through the buffers at the end of the platform. Its engine crashed through the façade of the station building, [...] and fell down on to the Place de Rennes. [...] The only fatality was a newspaper vendor on the square, who was killed by a piece of falling masonry".
For several days, gaping onlookers crowded around the locomotive, stranded in the middle of Paris. Among them were many photographers, both professional and amateur. Here they found an opportunity to use their cameras to prove that sometimes truth is stranger than fiction. The Musée d'Orsay print, which has no professional stamp on the back, is undoubtedly the work of one of these amateurs.
The sensational nature of the accident ensured a wide distribution for this image, in many versions. Even today, a postcard of the Railway accident at the Gare de l'Ouest is an absolute must for tourists in Paris.