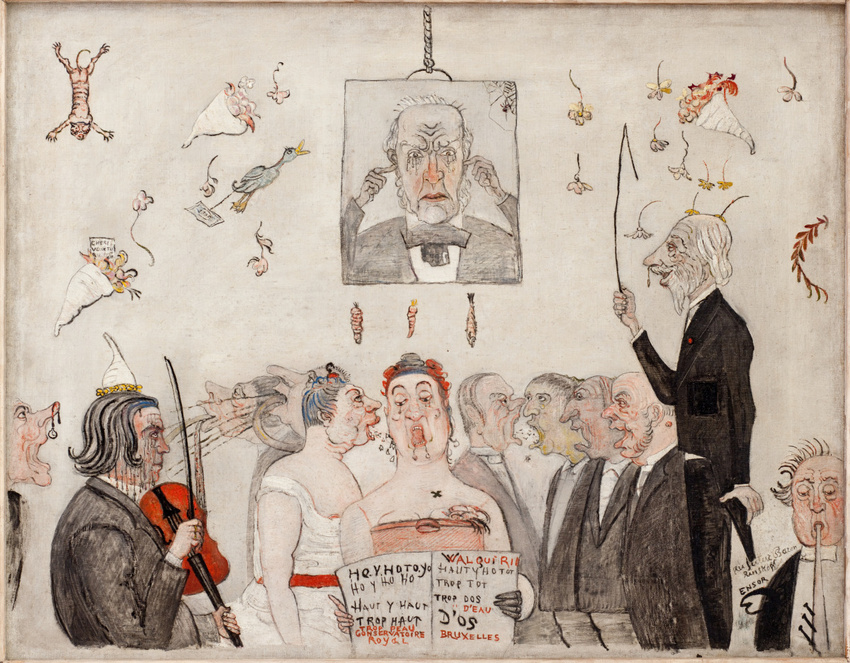 In 1880, when Brussels became the capital of Wagnerism, James Ensor discovered Richard Wagner's music. He was inspired by it and drew The Ride of the Valkyries, dated1883 (private collection), a work influenced by the epic spirit of the composer, a spirit that permeates Ensor's landscapes.
Au conservatoire, is one of a later series, and links in with the ironic, sarcastic or simply humorous paintings that the painter produced from the end of the 1880s. Bit by bit, the whole of Belgian society is attacked: – bathers, art critics who had not supported the painter, judges, doctors, police, players – and of course pretentious, enthusiastic art lovers. This collection of pictures observes a very codified composition, which is evident here: interior scene, symmetry, identifiable characters acidly portrayed, movement, grotesque, even scatological details, bright colours, accurate drawings, inscriptions and word play.
The personalities of the Brussels Conservatory are neither spared by Ensor nor by an audience, that indiscriminately throws flowers and laurels, as well as a cat, a duck and, of course, a pickled herring, the painter's totemic fetish symbol for his art (hareng-saur = art Ensor). The score held by Madame Ida Servais, a famous singing teacher, reveals a series of bad puns which emphasise the derisory character of the Wagnerian cult. Wagner himself appears in the form of a portrait hung above the personalities, crying with anger and with his fingers in his ears.
In his treatment of faces Ensor reflects his particular taste for carnival masks. Au conservatoire is, in the end, somewhere between a painting and a caricature, between the fantastic figures of Bosch and Brueghel and the drawings in contemporary, illustrated newspapers.