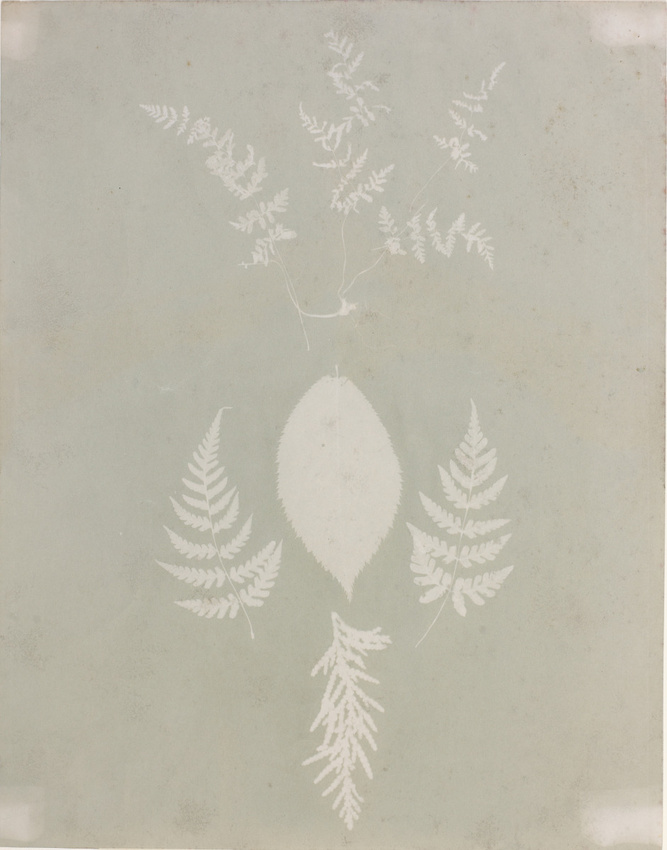 The only known works by Amelia Bergner consist of a few floral and plant arrangements collected into an album from which this page originates. The method she used combines photogenic drawings and the cyanotype process. The photographic drawing, a primitive photographic technique without a darkroom, consisted of laying out the chosen objects on a sheet of light sensitive paper. After being exposed to the light, these objects left a negative print. The technique was used throughout the century, before being rediscovered by the avant-garde photographers of the inter war period: the "Rayograms" of Man Ray and the "Photograms" of Moholy-Nagy.
As for the cyanotype, it is a printing process based on the light sensitivity of certain iron complexes which, when they dissolve, form Prussian blue. The resulting images turn a vivid blue after washing. In the case of this photogenic drawing, the pale shade can be explained by insufficient rinsing.
Bergner's work was part of a popular practice in the 19th century. Placing leaves on to a sensitised support to achieve a print was one of the first moves towards photography. In January 1839, William Henry Fox Talbot, who invented the process of photography on paper, acknowledged that: "Flowers and leaves were among the first objects I tried to reproduce". Following his lead, several British woman photographers who were keen on botany tried their hand at it: Thereza Llewelyn, Anna Dixon and most notably Anna Atkins. But Bergner's photogenic drawings reveal a taste for arrangement that distinguishes her from Anna Atkins who, in the early days at least, was more concerned with faithful reproduction than with composition.
Studious and delicate, Bergner's approach is more reminiscent of the cyanotype compositions of plants, produced around 1906 by Bertha Jacques, an engraver and photographer from Chicago.