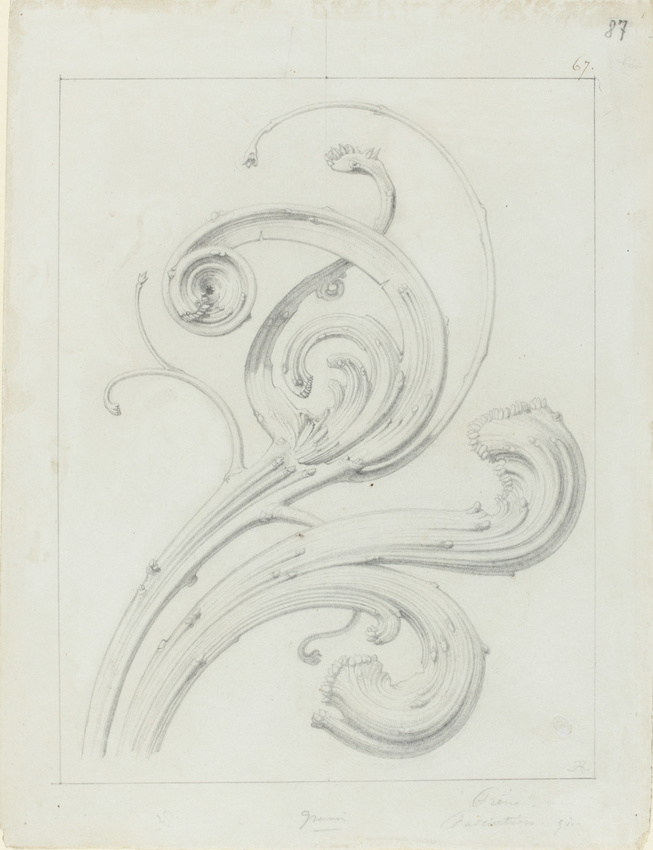 In 1866-1876 Ruprich-Robert published a seminal work: Flore Ornementale. Essai sur la composition de l'ornement. Eléments tirés de la nature et principes de leur application. This book was the fruit of twenty years' teaching of ornamental composition at the Ecole gratuite de dessin de Paris (Paris Free School of Drawing). Founded in 1766 to train students in drawing applied to the mechanical arts and industry, the school became the Ecole nationale des Arts Décoratifs in 1877.
Ruprich-Robert succeeded Viollet-le-Duc and taught from 1850 to 1887. He gave his students the rudiments of art history, archaeology and botany, then explored ornament applied to a specific subject, a vase, rose window, frieze, or piece of furniture before going on to creative applications. He illustrated his course with freehand drawings painted with egg, lampblack and white lead. These studies are the basis of Flore ornementale. Ruprich-Robert was not alone in his interest in flora. From the beginning of the Second Empire numerous compilations were produced, including highly naturalistic "portraits" of plants. Photography also played a capital role in disseminating models; Adolphe Braun, an industrial designer in Mulhouse, was a precursor in this field, producing a collection of three hundred photographic plates of flowers in 1850. Owen Jones published his impressive Grammar of Ornament in 1856, taking his examples from monuments and manuscripts but very seldom from nature.
Flore is divided into four parts, arranged in order of increasing complexity: Leaves, Plants, Flowers, Compositions. The architect suggests presenting plants symmetrically, carefully respecting their anatomy, to make ornamental motifs. Architects, painters, sculptors, ornamentists, and "industrial artists" all used his work as a reference. The original drawings are now in the museum.