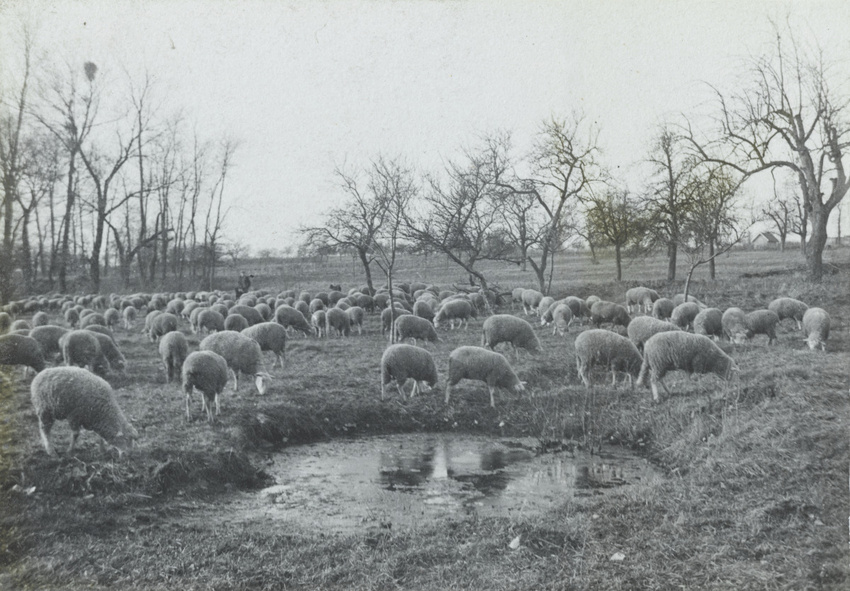 Although Charles Augustin Lhermitte, an amateur photographer, took a great interest in the formal research of the Pictorialists, the Naturalism in the paintings of his father, Léon Lhermitte, had a lasting influence on him.
The younger Lhermitte was interested in village life (markets, pilgrimages and Breton religious festivals) and rural life (seaweed burning, reaping, fishing, lace-making and tending sheep). He did not try to idealise his subjects, and practised his art as a true painter of rural life, replacing the paintbrush with the lens. He had a keen eye for framing the shot, and for the interplay of light and shadow. Although, in the pictorialist manner, he reworked a number of his prints using mainly gum bichromate, he also left more than two thousand small prints treated simply with gold chloride, for example this photograph: Flock of sheep near a pond.
He aimed for clear definition in his shots, prompting him to use a lens that "gave sharpness and clarity to the image, respected the planes and relief, while retaining this luminous atmosphere which suffuses everything with light, and becomes more intense with distance." Thus, abandoning the soft focus of Pictorialism, Charles Lhermitte joined those documentary photographers who, in the late 19th and early 20th century, wanted to record for future generations, traces of a culture they anticipated would soon disappear.