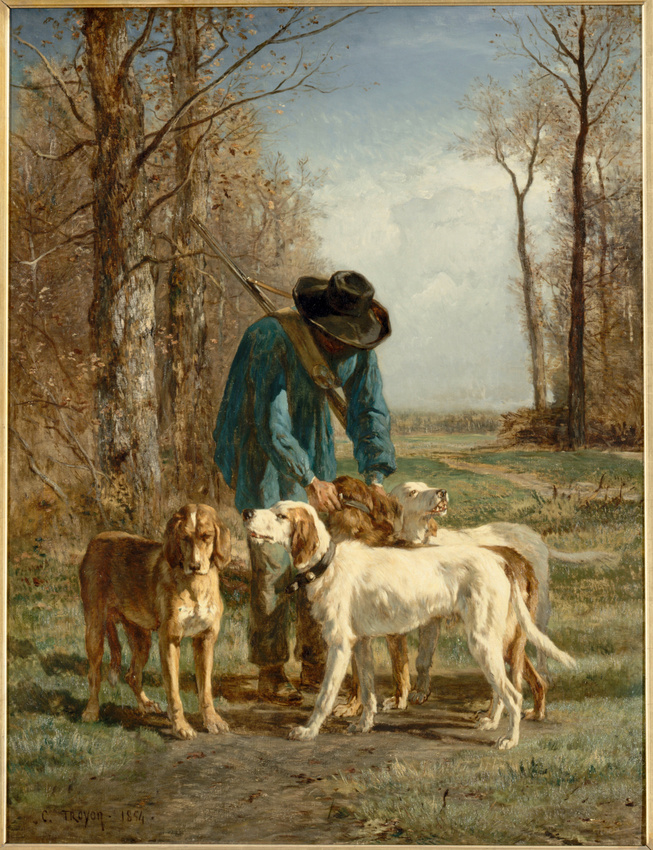 From the very beginning of his artistic career, Troyon was interested in landscape painting, and produced many studies in the forests of Meudon, Compiègne and Saint-Cloud. He presented his first works, still influenced by his Neo-Classical training, at the 1833 Salon. His meeting with the painter Jules Dupré was a decisive moment for him. Dupré encouraged Troyon to work out in the open air, and taught him to observe and appreciate the wild locations of the forest of Fontainebleau as well as the aesthetics of Theodore Rousseau, Camille Corot and Narcisse Diaz de la Peña. However, while still remaining loyal to his friends, Troyon was gradually moving towards animal painting, and achieving considerable success with it. He liked painting dogs, and revealed an exceptional talent as a colourist in his hunting scenes.
Here, the composition of the forest landscape – a path disappearing between the trees into the distance – recalls Dutch painting. Troyon was particularly familiar with this school having visited the Netherlands in 1847. But beyond this classical heritage, the artist was keen to overturn the traditional hierarchy of the genres. The scene he paints, on quite a large size canvas, is a very ordinary one. Moreover, it is not the human figure that forms the real subject of the painting, but rather the dogs placed in the foreground. The gamekeeper wears a dark shirt, and his face is completely hidden by the brim of his hat. The four dogs, on the other hand, have their heads raised, with the autumn light reflected in their light fur. These animals were certainly painted from life, and Troyon here produces genuine dog portraits.