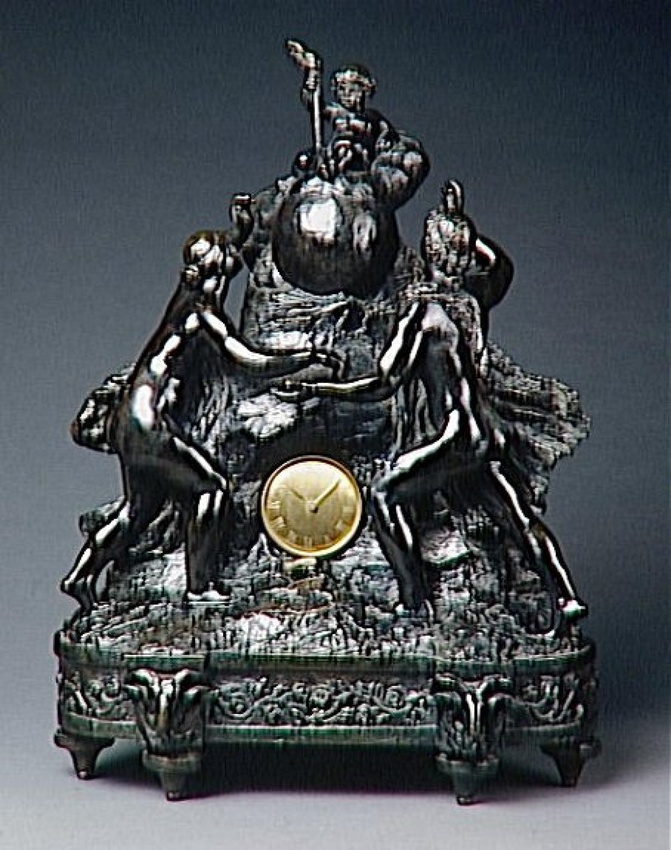 Towards the end of his life, Renoir moved to Cagnes-sur-Mer in the south of France. In spite of being paralysed, he agreed to produce some sculptures. It was the art dealer Ambroise Vollard who introduced him to Richard Guino, one of Maillol's pupils. Between 1914 and 1918, Guino worked under Renoir's direction on sculptures with the same themes as his paintings: portraits of his friends and family, or nudes, as in this clock showing a man and a woman paying homage to a child.
Drawings, and sometimes sketches were made by the painter to be reproduced in three dimensions by Guino. Anticipating the success of these sculptures, Vollard did everything he could to ensure he had exclusivity for their production and distribution in bronze, going as far as to minimise Guino's role. It took a lengthy lawsuit before Guino's role as joint artist was fully recognised in 1973.
This clock, made from 1914 to 1917, was produced in two versions. This model corresponds to the first version, mass-produced by Bisceglia. With this work, Renoir returned to where he started, as a decorator - he had, in fact, begun his career as a painter of porcelain.