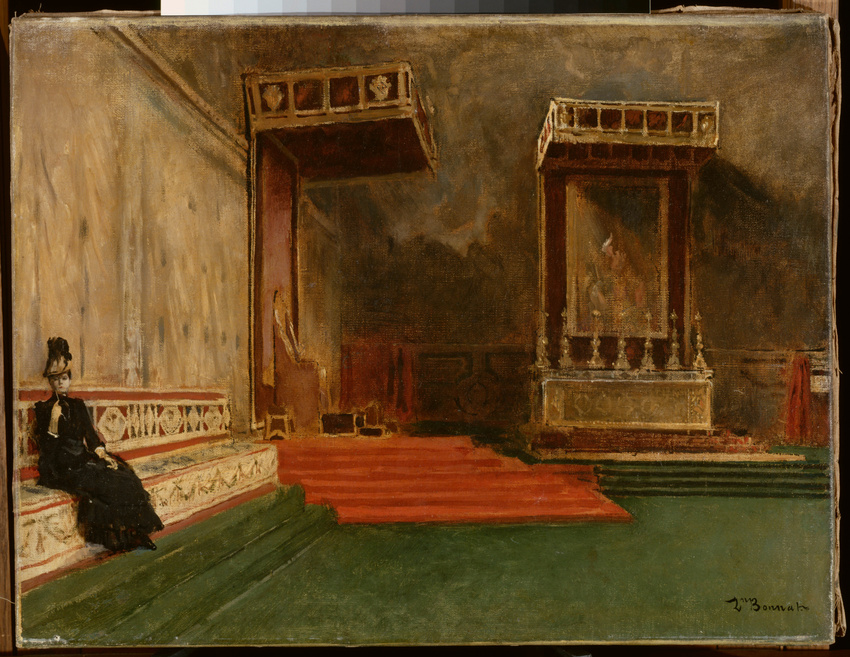 Various gifts and bequests from Mrs Edouard Kann and her sister, Mrs Albert Cahen from Antwerp, between 1925 and 1929, have given the the Musée d'Orsay a rich collection of works by the painter Léon Bonnat. Alongside a self-portrait of the artist at the age of twenty-two and many portraits, including those of the donors, is this exceptional Interior of the Sistine Chapel, probably painted in the 1870s.
This almost deserted and nearly touristy vision of one of the highlights of the Vatican (the decoration of which is barely suggested) is swiftly brushed in a narrow range of colours, animated only by a single female figure sitting in the foreground near the left-hand edge of the painting, facing the viewer. This woman, probably Mrs Kann with whom the painter travelled to Italy, is adjusting her lorgnette to look more closely at the decoration or perhaps at the painter who was busy sketching this curious moment.
With this painting, Bonnat gives us a profane version of Good Friday in the Sistine Chapel which he had painted in 1860, taking his inspiration from a painting by Ingres in 1814, Pope Pius VII in the Sistine Chapel.