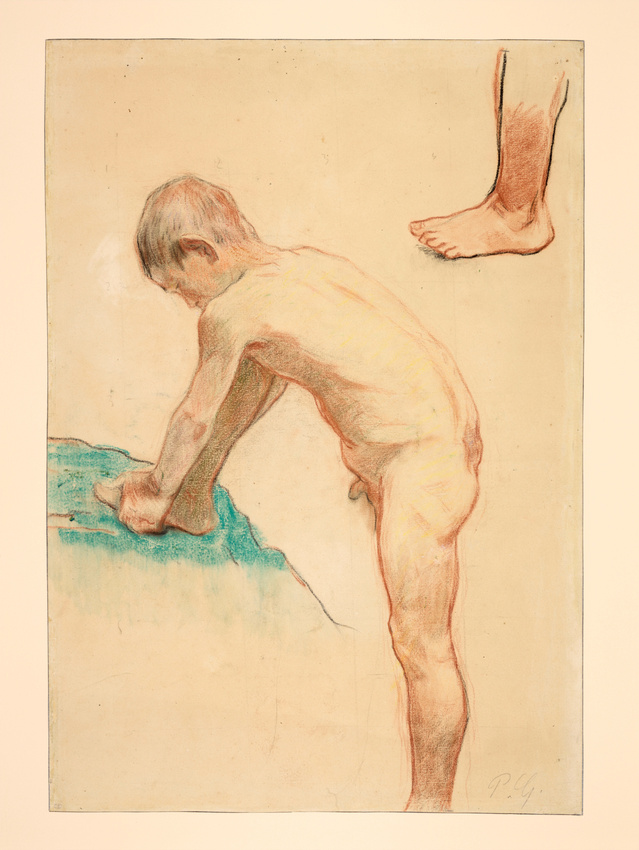 This drawing was a study for one of the two characters in the painting Young Breton Bathers (1888, Hamburg, Kunsthalle). Executed in the colours of the paintings by means of a subtle mix of sanguine and yellow pastel, it is striking for its monumentality and the originality of its composition.
Both the subject and the experimental modelling are reminiscent of Degas for whom Gauguin had a deep admiration. Although not having had any academic training, Gauguin here finds, perhaps accidentally, a process dear to the Ecole des Beaux-Arts, consisting of repeating a detail of the figure in a corner of the sheet, in this case the foot. We can also see the traces of the sheet having been squared up, proof of the application with which the artist composed this study.
The fact that some of the contours in sanguine, particularly the upper part of the single foot, seem to have been re-worked in charcoal, has sometimes led art historians towards the idea of two dates. An initial rough sketch was probably done during the artist's first stay at Pont-Aven during the summer of 1886, and then Gauguin probably later went over the outlines of his drawing in preparation for the painting in 1888 using a more synthetist style. This theory remains hypothetical. In fact, stylistically, there is nothing to suggest that this bather was not drawn in 1888 directly in preparation for the painting, and very probably from life.