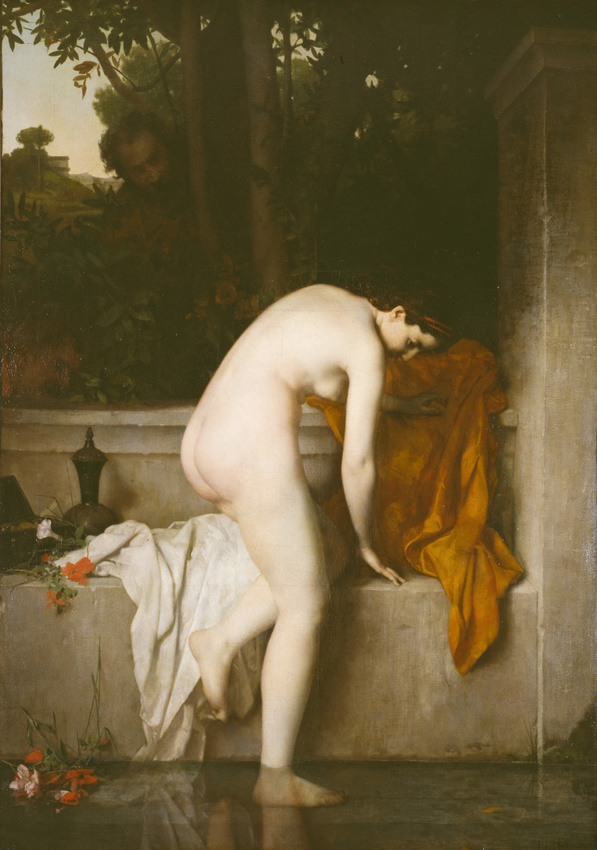 The Biblical episode of Suzanne bathing, often treated since the Renaissance, was above all an opportunity for the artist to paint a handsome nude. This aim became clear in Henner's version of the theme of which he sent back to France in the last year of his residence at the Villa Medicis. For this compulsory exercise, supposed to demonstrate the student's progress and skill in execution, he naturally took his inspiration from prestigious examples left by the great masters in the eternal city. The study of Suzanne Bathing by Guerchino (Colonna Gallery) and Titian's Sacred Love and Profane Love supplied the original idea.
His work was severely criticised particularly for the heaviness and lack of nobility in the model's body. Worse still, for the artificiality of the subject which, on the pretext of being a history painting, showed no more than a simple bather. This tendency to get rid of any narrative alibi in painting the nude, treating it as a subject in itself, could be found in the work of many contemporary artists, starting with Courbet.
Henner's Suzanne is nonetheless a vigorously modelled, sturdily built young woman well set off by the drapery. A prelude in a way to a long series of female figures with pearly complexions, delicately detached from twilight landscapes, a motif which Henner treated over and over again.