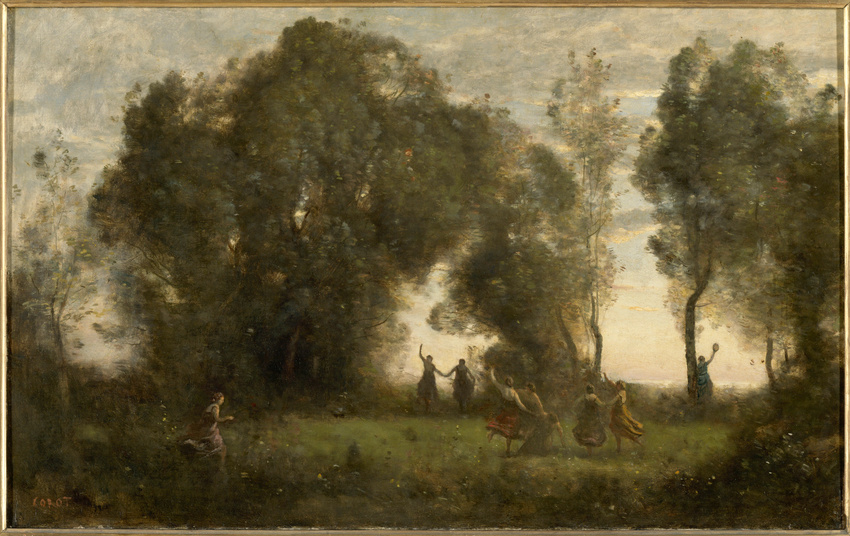 The Dance of the Nymphs represents a turning point in Corot's career, announcing his move from "historical" to "lyrical" landscapes where the natural world is increasingly subject to atmospheric effects. Here however, the artist does not go as far as a "pure" landscape like those of the painters of the Barbizon school to whom he was very close. Corot's work retains the mark of tradition both in the survival of mythological subjects and in the clear distinction between studies "after nature" and studio paintings. Furthermore, in 1857, he confessed that Millet's peasant scenes were: "a new world for me, one in which I am lost; I am too attached to the old one".
The Dance of the Nymphs was the result of a "collage" of two different scenes. Even though the painting was presented as a bacchanal at the 1851 Salon, the dancing figures may have been based on the artist's reverie of scenes recalled from the Opera. In addition, the backdrop of trees resembles a stage curtain, and imbues the whole scene with the atmosphere of a ballet. The title further adds to the ambiguity, the word "matinee" possibly being an allusion to daytime performances, as opposed to "soirées". For this landscape, Corot produced a mirror image of a study he did in the gardens of the Farnese Palace in Rome twenty years earlier. The soft, blurred leaves, so specific to this later period of Corot's work, testify to the artist's interest in the elements of nature rather than the characters portrayed. This is a significant aspect that contributed to Corot's importance in the development of 19th century painting. He is just one step away from the rural landscape, which itself heralded the research of the future Impressionists.