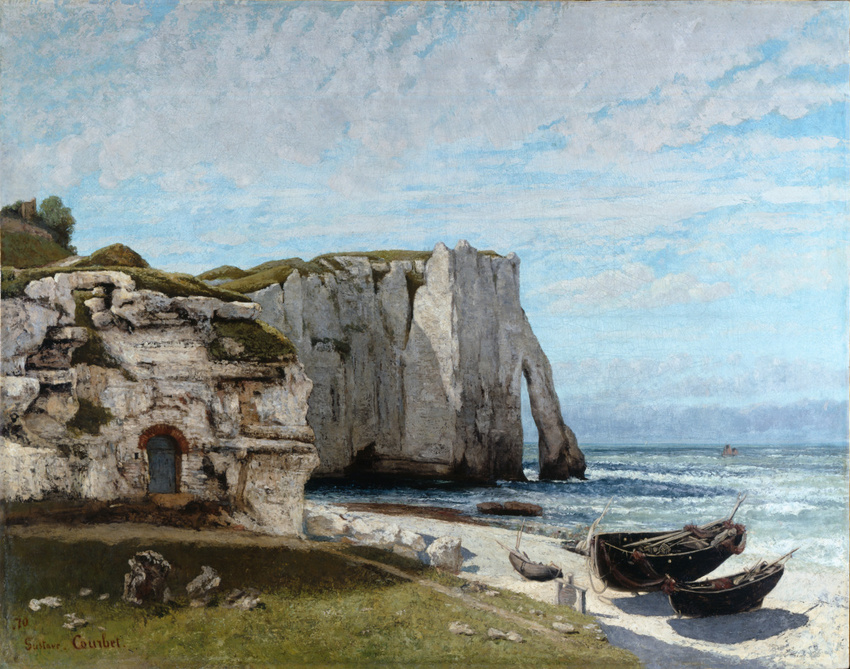 Etretat had attracted painters since the early nineteenth century, drawn by the clarity of the air and the quality of the light. In summer 1869, Courbet arrived in his turn in this small Norman town. He stayed in a house by the sea, tucked against the cliff on the left of the bay (Falaise d'Aval) which he painted many times over. His most accomplished version is certainly The Etretat Cliffs after the Storm.
In this pure landscape, swept clean of people and all anecdotal detail, Courbet brilliantly balances land and rock, sky and sea. He has made each natural element almost palpable. The clarity of the air and the limpid light after the rain are magnificently caught. The critic Castagnary, a friend of Courbet's and a firm believer in realism, spoke of "the free, joyous air which circulates in the canvas and envelops the details." We suddenly understand the admiration that the future Impressionists felt for Courbet's light and freedom.
Courbet sent The Etretat Cliffs after the Storm and The Stormy Sea to the Salon of 1870. The two canvases, painted about the same time, set up a dialogue as if they were describing successive phases of the same phenomenon. The praise they drew at the Salon consolidated Courbet's reputation and made him one of the leading figures in the art scene of his time.
Courbet Dossier