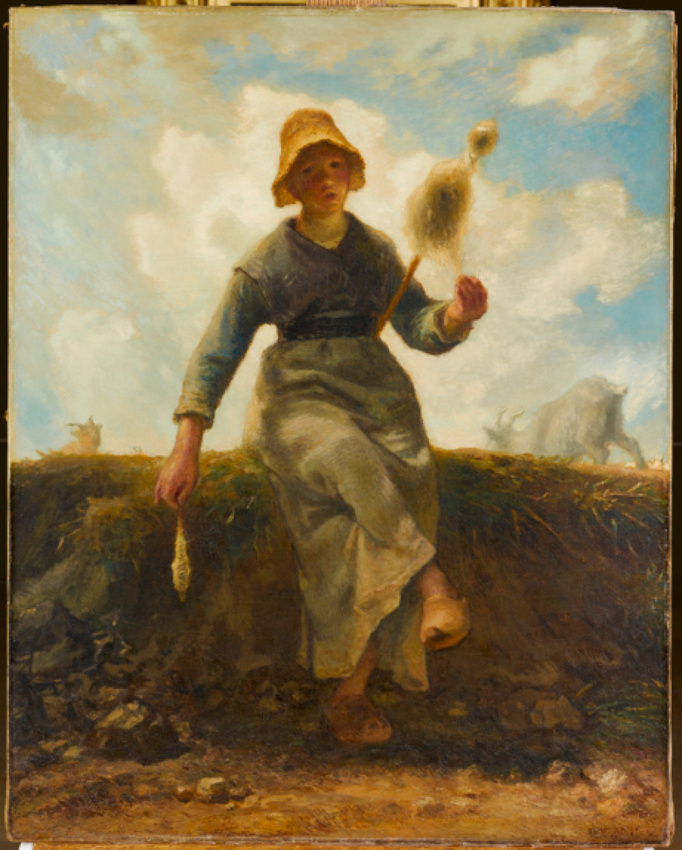 A young peasant girl, sitting on a bank, is spinning a length of wool on a spindle, while minding her goats. She is wearing a dress of rough material and a woollen fichu. She has wooden clogs, and a straw bonnet on her head with a shapeless brim. Her distaff that holds the skein of rough wool is made from a hazel twig. She spins the wool, using the spindle in her right hand to wind it.
This young spinner was painted in Barbizon from a series of sketches made by Millet in 1866, when he was staying in the Auvergne and in the Allier. He went there with his wife, who was taking the waters at Vichy, and was amazed by the region and its inhabitants: "The people are far more like peasants than those at Barbizon", he wrote to Sensier. "They have that good, stupid kind of awkwardness, which doesn't in the least smack of the neighbourhood of the Baths, I assure you. As a rule, the women have faces which are by no means bad."
The young goatherd pictured here, reveals this interest in the faces he observed in the Auvergne. This peasant girl looks directly at us, and draws us into her psychological universe. The result is a Naturalist portrait and perhaps a transposition, in the painter's last years, of what had been present in his earliest portraits.