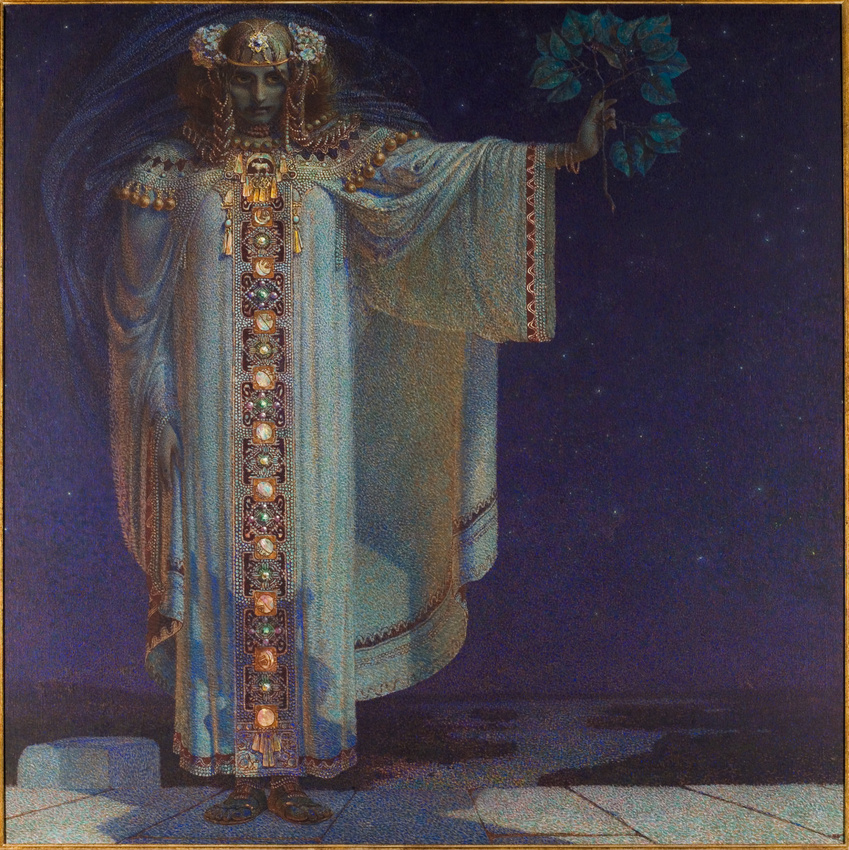 Libuse is a mythical Czech princess. Venerated for her wisdom and her gift of prophecy, she is regarded as the originator of the first national dynasty and the founder of Prague. It is said that Libuse reigned over Bohemia from 700 to 738, and managed to prevent it from being divided.
Here, Mašek portrays her as a hieratic, spectral moonlit figure, dominating a nocturnal landscape where a river winds across the plain. This is most probably the River Moldau, seen from the hills above Prague.
Libuse is wearing a flowing robe, a priestly garment, reflecting her status as prophetess, on which a vertical band shows the successive phases of the moon. Her necklace, adorned with a crescent and an ox, is reminiscent of the Egyptian symbolism of Hathor. Her outstretched left arm offers a branch from a lime tree, the sacred tree of the Slavs.
The blue tones recall compositions by certain French symbolist painters of the time, like Alphonse Osbert, whereas some of the iconographic details, like Libuse's headdress, seem to show the influence of Alfons Mucha, Mašek's compatriot. In this painting, Mašek abandoned his familiar academic technique and adopted the neo-impressionist principles of Seurat and his friends, which had spread across Europe.
This large painting is undoubtedly Mašek's masterpiece, and it fits into the context of the nationalist movement then developing at the end of the 19th century, in a Bohemia that was still part of the Austro-Hungarian Empire.