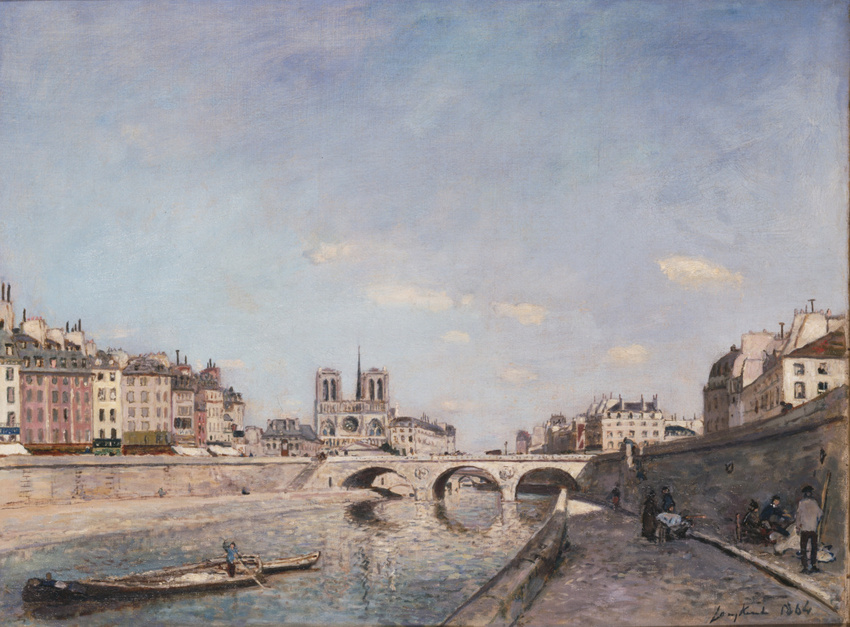 The sweeping diagonal of the Seine and the large area left for the sky in this composition remind us that Jongkind, a Dutch painter, was trained in the tradition of the seventeenth-century Dutch landscapists. After he moved to France, temporarily from 1846 to 1855 and then permanently in 1860, he was influenced by nineteenth-century French landscape artists, particularly Corot, whose luminous atmospheres he admired and sought to imitate.
In the 1860s, Jongkind often stayed in Normandy with Boudin. He met the young Claude Monet there, who was fascinated by the older artist's ability to catch fleeting variations in the weather in his watercolours. Monet later said of Jongkind: "He was the one who really trained my eye..."
Jongkind never exhibited with the Impressionists but he is regarded as one of their precursors. Several elements in The Seine and Notre Dame Cathedral, Paris suggest this kinship. The vibrant reflections of the sky and the water, the fragmented brushstrokes, and the "deep love of the modern side of Paris" evoked by Emile Zola help explain that in 1927, in a book on Jongkind, Paul Signac called him the "renovator of the modern landscape" and placed him "between Corot and Monet".