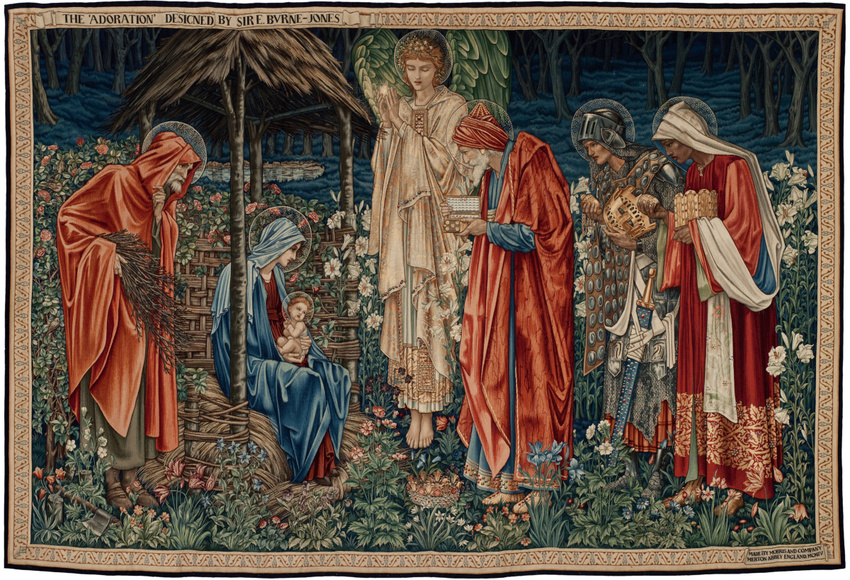 In 1886 the rector of Exeter College, Oxford, commissioned William Morris, the soul of the Arts & Crafts movement, to make a tapestry for the college chapel. The subject proposed – an Adoration of the Magi – was immediately approved by William Morris and Edward Burne-Jones.
Two years later, the painter, who had been working with Morris & Company for almost ten years, particularly in the area of stained glass, delivered the preliminary sketch of the tapestry, today kept in the Victoria & Albert Museum in London. In truth, he only designed the figures, the greenery and architecture having been entrusted to his colleague John Henry Dearle.

This composition was the first that Burne-Jones had designed specifically for a tapestry. Previously, pieces woven from his designs by the weavers in the workshops set up by Morris in 1881 at Merton Abbey were adapted from preliminary sketches for stained glass. Completed in 1890, The Adoration of the Magi delighted Morris, who had a great admiration for this beautiful craft, and a fascination for the world of medieval guilds. He then declared: "Nothing better of the kind [...] has ever been done, old or new".
This enthusiasm was shared by critics and art lovers alike. In fact, nine versions were commissioned between 1890 and 1907. This one was produced in 1904 at the request of the banker Guillaume Mallet when he refurbished his house, the Bois des Moutiers, in Varengeville-sur-mer (Seine-Maritime), a house built by the architect Sir Edwin Lutyens.