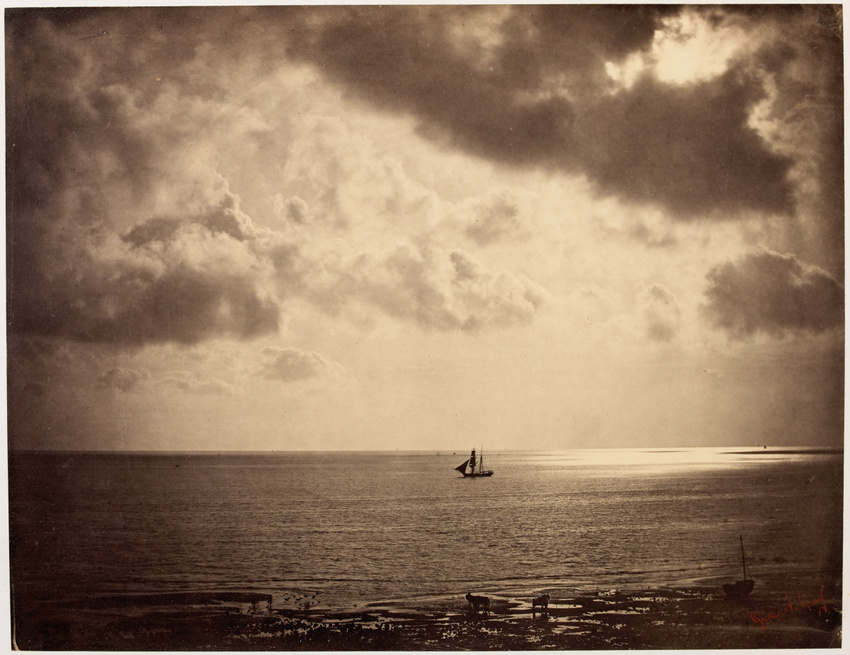 Charles Marville’s studies and Le Gray’s famous Brig (originally shown in London in 1856) featured together in exhibitions that captivated the world of photography on both sides of the Channel in 1857. The two men demonstrated different ways of approaching the difficulty of capturing the sky using the new collodion process, which Le Gray, a matchless technician and active teacher, had invented.
Indeed, it was enough for Le Gray to proudly subtitle his print “Marine with clouds obtained simultaneously” to cause a sensation, and even prompt incredulity. Quite apart from the technical feat of being obtained with a single negative, this seascape—made on the Normandy coast in 1856—constitutes a powerful and large photographic tableau. As a student of the painter Delaroche, Le Gray was steeped in pictorial tradition which he transposes here with a sensibility that evokes Courbet in terms of the width of the framing, the radical frontality, and emphasis on the horizon.
This community of vision is confirmed by the spectacular series of Waves he photographed on the Mediterranean coast the following year. Because of the fugacity of the subject, the quest for the “Sublime of Art” in these works inevitably meant combining two complementary negatives—one for the sea, one for the sky—in the final print.