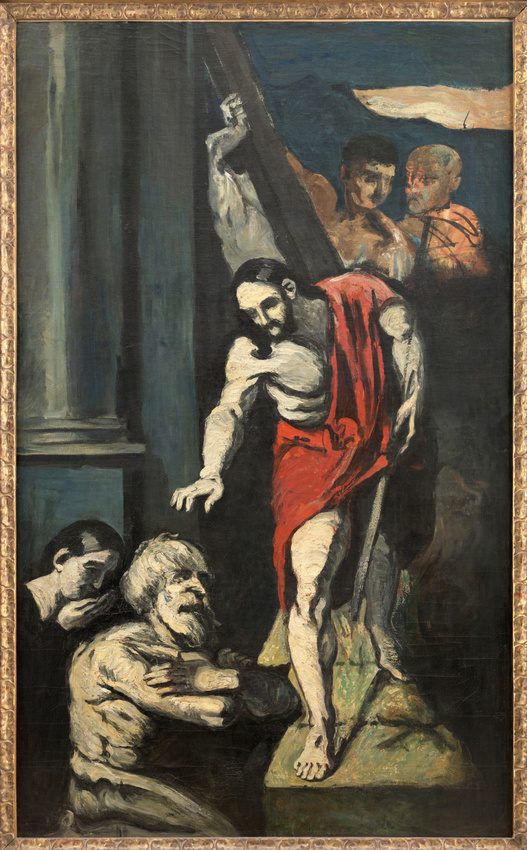 During the 1860s, Cézanne turned his hand to murals to decorate the family home, Jas de Bouffan, near Aix-en-Provence. One year after the artist's death, the new owner had some of the decorations transposed on to canvas, intending to offer them to the State. Unfortunately, the Musée du Luxembourg refused this donation. The different elements painted by Cézanne were then gradually dispersed.
As indicated in documents from the period, this fragment, Christ in Limbo, was part of a much larger composition. Another work in the Musée d'Orsay, La Madeleine, was also part of it, although there is no aesthetic reason to link the two, and there is a surprising difference in scale between the two figures. Brought together in the Musée d'Orsay, the two fragments give us a better understanding of the themes developed by the artist. These paintings reflect his beliefs, a mixture of traditional religious culture and Provencal traditions. In fact, the important place given to Mary-Magdalene recalls the medieval legend that tells how she ended her days at the foot of the Sainte-Baume hills, near the Mont Sainte-Victoire. She is placed next to the scene showing Christ's descent into Limbo, a dwelling place between death and resurrection where the souls of the Just in the Old Testament awaited Redemption. In fact, the characters in the bottom left hand corner are probably Adam and Eve.
A remarkable testimony to the artist's precocious talent, this work interprets an engraving from a work by Sebastiano del Piombo (Madrid, Prado Museum). Cézanne pushes the Tenebrism of Sebastiano del Piombo, to the extreme. The intentionally restrained colours are dominated by red, blue and white applied in broad brushstrokes. They appear as vigorous impasto intercepting the light, making the surface of the picture vibrate, and standing out vividly against a black background. This painted image reveals Cezanne's desire to develop a personal dramatic style, while still displaying the influence of his elders.