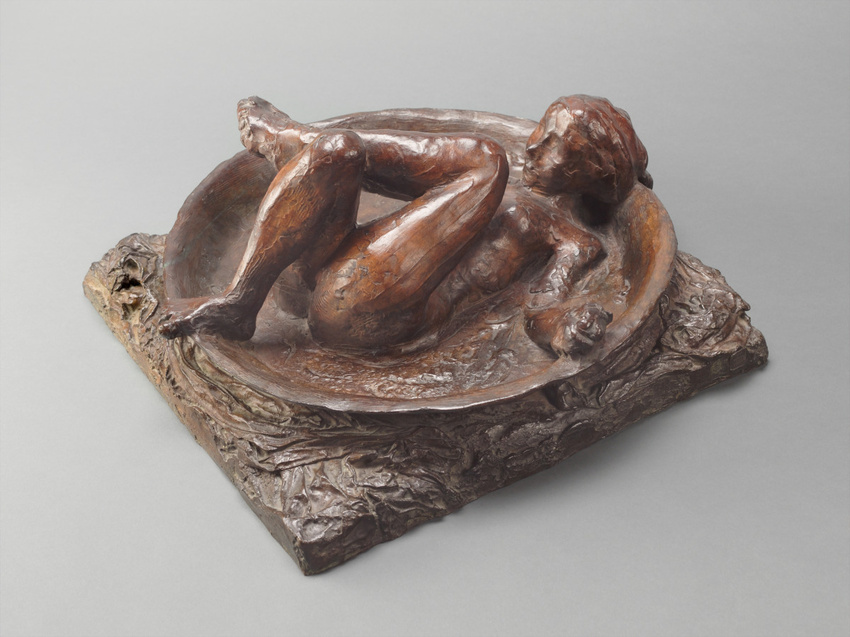 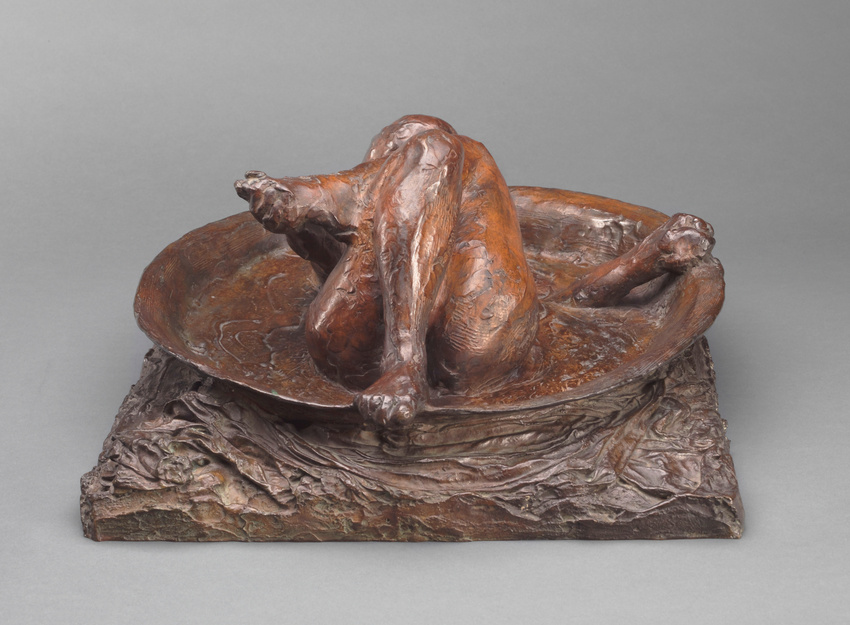 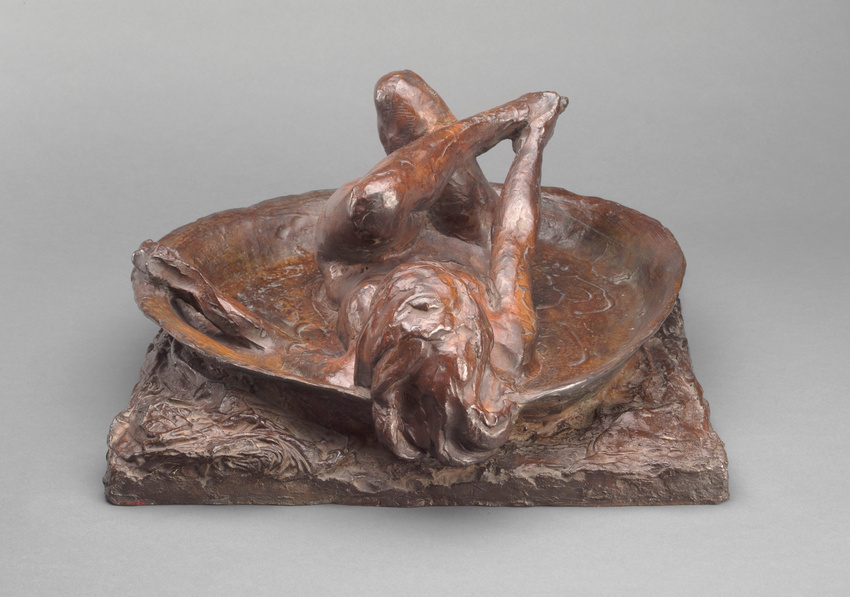 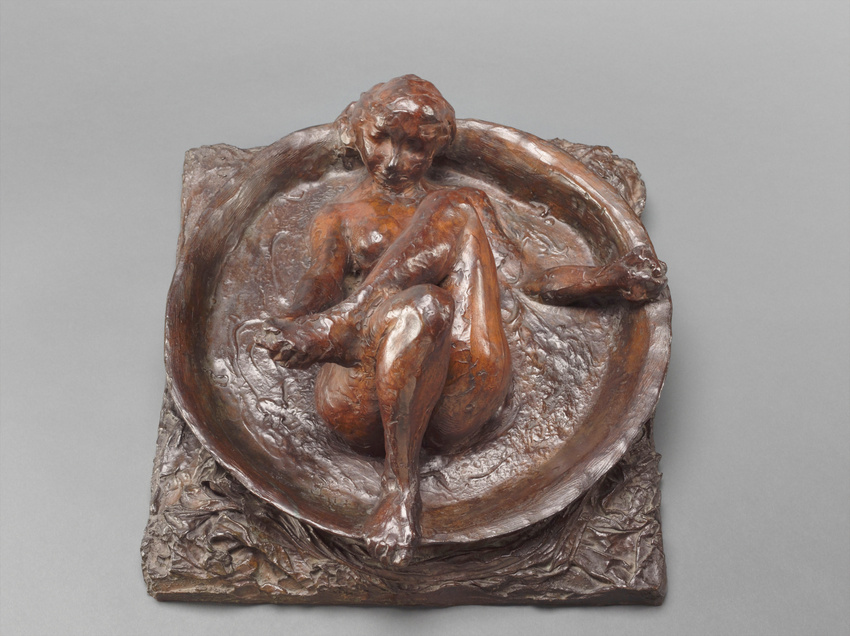 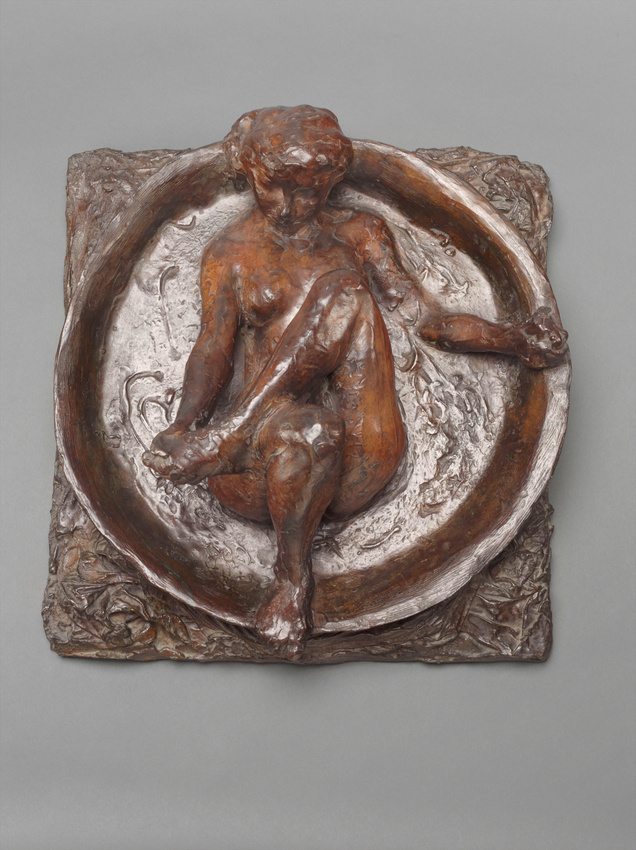 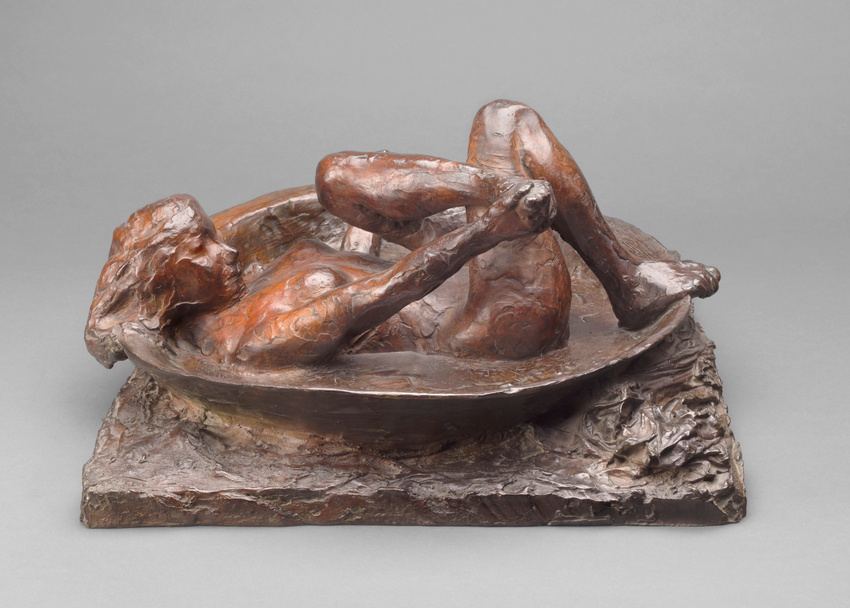 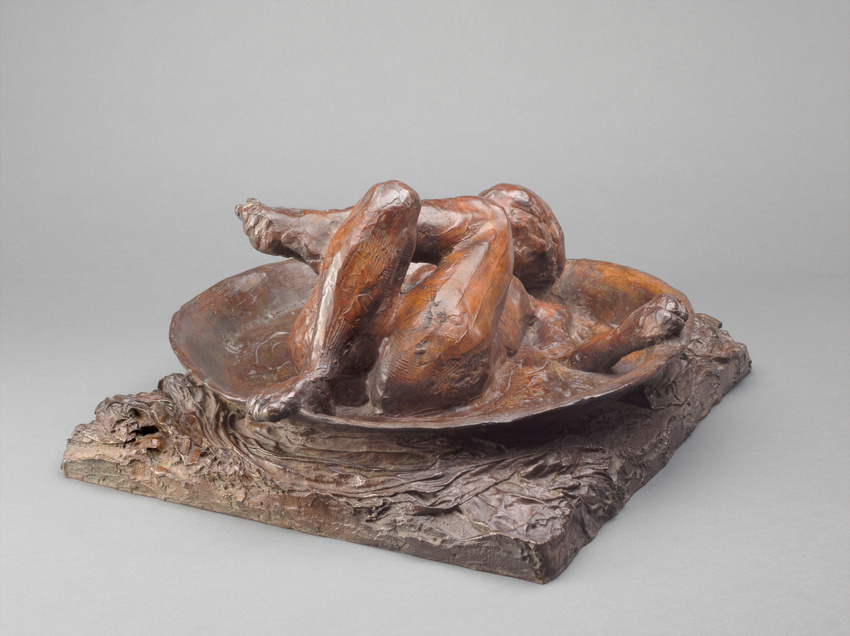 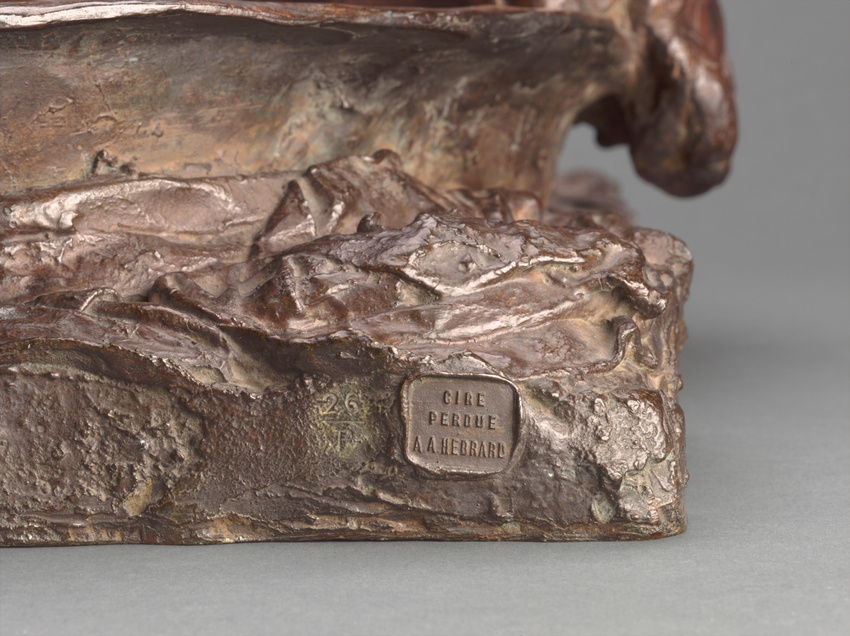 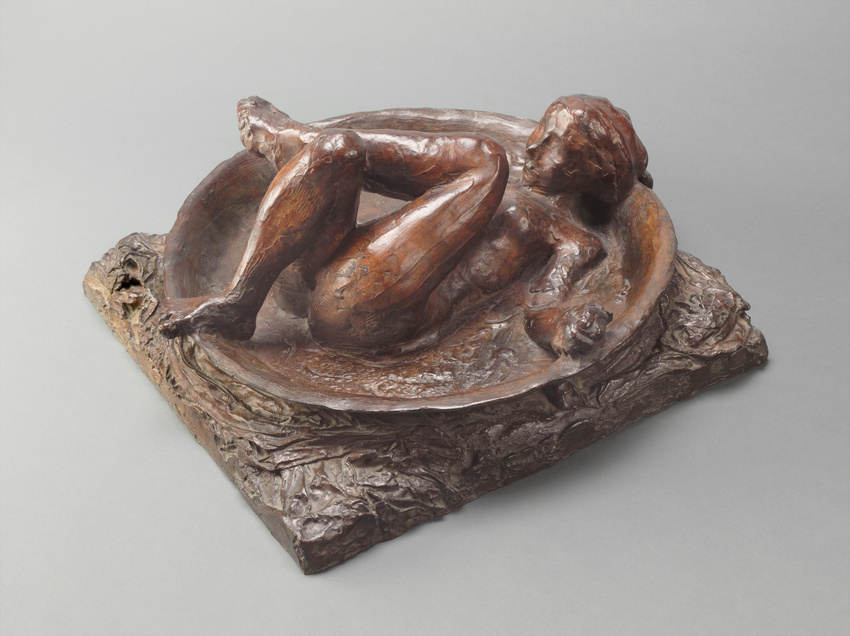 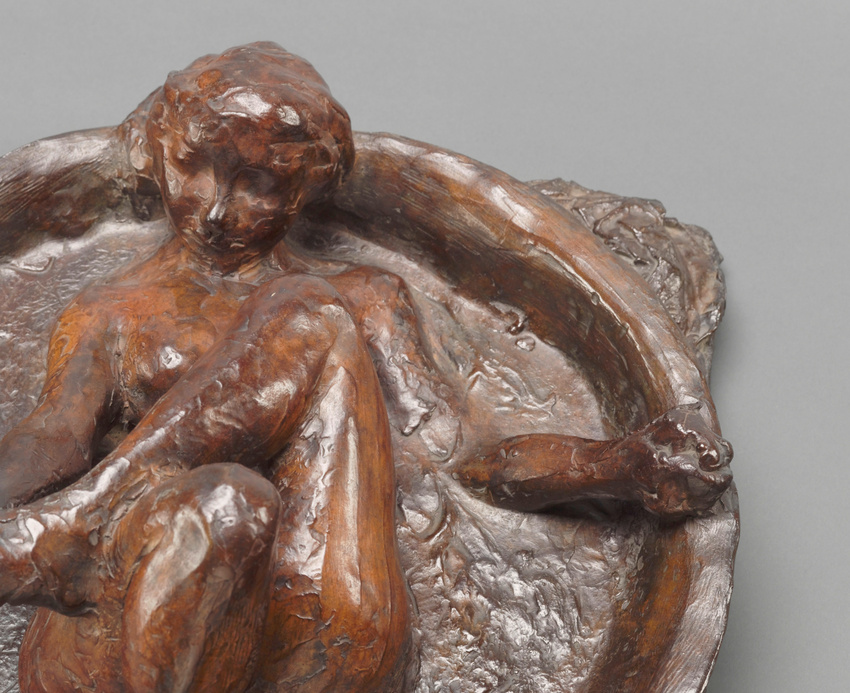 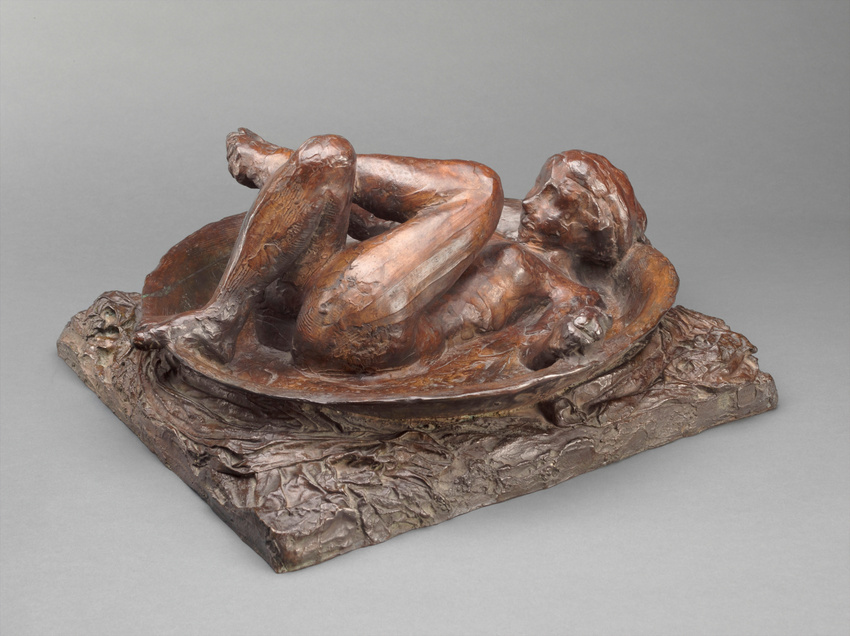 Nearly a quarter of the subjects sculpted by Degas show women at their toilet. Here, the painter of modern life has taken a fresh look at a bathing scene, which so inspired the artists of the Renaissance. In technical terms, The Tub solves the problem of fitting a figure into a circle, a puzzle which goes back to the beginnings of art. It also anticipates the avant-garde in its assembly: in the original wax model, which is in the National Gallery, Washington, and which this bronze figure reproduces, the tub is made from a sheet of zinc, with a fine layer of plaster in the bottom to suggest water. The base is draped with coated rags, which Degas described to his friend, the sculptor Albert Bartholomé, on 13 June 1889: "I have done a lot of work on the little wax model. I have made it a base from cloths dipped in roughly mixed plaster." He talked about the work as early as 1888: "I have not yet done enough horses. The women will have to wait in their tubs." We therefore have a dated sculpture, which is rare for Degas.
This "distant" artist, who sculpted for his own satisfaction, told Thiebault-Sisson in 1897: "Nobody will see these essays, nobody will talk about them [...] Before I die they will all be destroyed and it will be all the better for my reputation." But after Degas's death on 27 September 1917, seventy-three original wax models were saved from the one hundred and fifty found in his studio. On 13 May 1918, a contract was signed between the artist's heirs and the founder Adrien-Aurélien Hébrard. His furnace foreman, Albino Palazzolo, astutely spared the original wax models by using wax copies taken from the bronze models. The full set of models is in the Norton Simon Museum, Pasadena, California. The Tub is one of the set which was cast in bronze, the "material for eternity" that Degas refused to use.