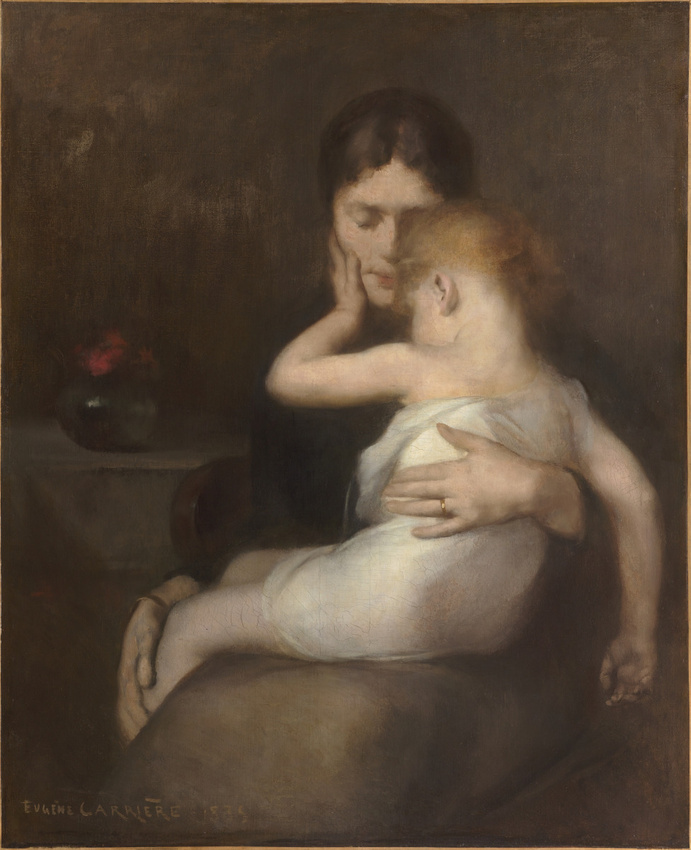 In his book La Vie artistique published in 1892, Gustave Geffroy wrote of Carrière: "He has taken the Holy Mother and Child, the religious motif that runs through the paintings of old Italy, [...] and has turned it into the bourgeois subject of modern maternity [...]. Of course it is no longer the calm and serene image of mother and child of the era of religious faith, but that of the century of pessimism, an image of maternity that reveals the darkest thoughts of the mother [...] who, with her worried embrace, and arms wrapped anxiously around her child, seems to be perpetually fending off illness and death". This analysis is even more touching when one knows the context within which this work was painted. It is in fact a portrait of the painter's wife, tenderly embracing one of her children, aged six years old, who was to die the same year the picture was painted.
In a later period, Carrière went on to produce paintings using a palette of browns, enhanced only with a few touches of white. Here, even if the whites and browns are already dominant, the work still retains some traces of colour. A bowl of red flowers, in particular, occupies the centre of the left hand side of the painting, thus completing the composition and balancing the off-centre positioning of the characters.
When the contents of Carrière's studio were sold in 1920, this extremely moving painting was finally bought back by the artist's family, and given to the Louvre museum three years later.