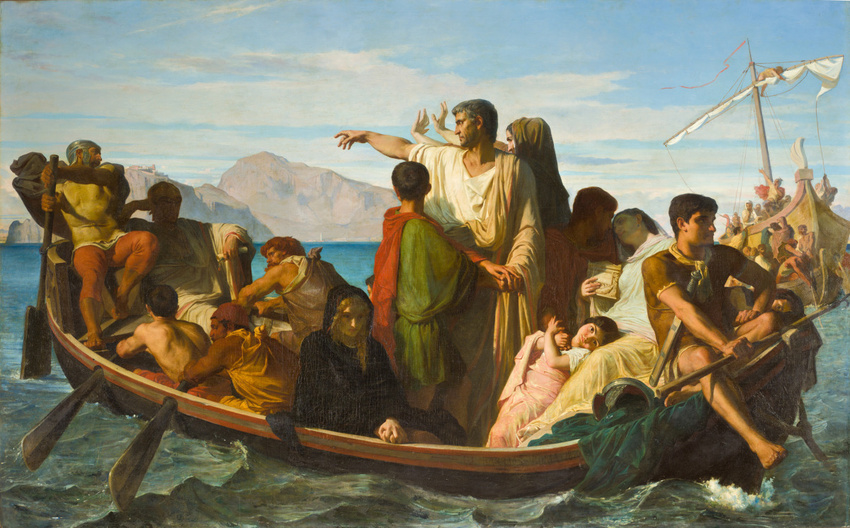 Inspired by the Lives of the Twelve Caesars by the historian Suetonius, The Exiles of Tiberius shows a frieze of people banished by Tiberius, the tyrant who ruled Rome from 14 to 37 BCE.
Evoking the faces on ancient coins, the strict profile of the republican senator in his toga, bidding farewell to the land he is abandoning, conveys a sense of austerity and moral rectitude. In front of him, the dejected, hooded woman in black is like a personification of grief.
Like David in his Sabine Women, the painter demonstrates his talent by offering a variety of facial expressions. In spite of the classical restraint, the vigor of the oarsmen instills a kind of romantic elan into the composition, setting up an echo of Gericault's Raft of the Medusa. The boat thus partakes in the symbolism of the passage from life to death, one of the great themes running through nineteenth-century art, from Eugene Delacroix to Odilon Redon.>br />As is often the case, a learned subject is used to speak of contemporary events: in this instance, the confiscation of the ideals of the Second Republic, proclaimed in 1848, by the political reaction that led to Napoleon III's coup d'état in 1851.
Barrias taught Degas; this work, painted at the Académie de France in Rome, winner of an award at the official Salon of 1850−51, is his masterpiece.