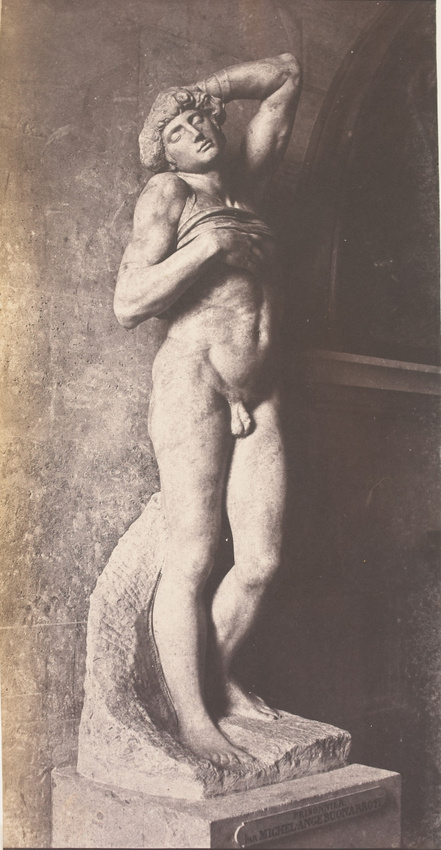 In 1854, Edouard Baldus photographed The Dying Slave by Michelangelo, a sculpture created in 1513-1515 for the tomb of Pope Julius II. When it came into the Louvre in 1794, the work was placed in a room on the south wing of the ground floor where medieval and Renaissance works were displayed. One of the first photographic reproductions of sculpture of the 19th century, this is one of the most beautiful, if not the most beautiful, in the way the light caresses the marble and the choice of viewpoint enhances this magnificent piece of sculpture.
Ernest Lacan, senior editor of the review La Lumière, praised this image in June 1854, while mentioning other sculptures from Antiquity and the Renaissance photographed by Baldus, specifically the other Dying Slave, Venus de Milo and Milo of Croton by Puget. In the absence of any historical documentation, we have no idea of the details of the commission. It could be that Baldus, who was close to sculptors like Simart and David d'Angers, produced this work on his own initiative. The fact remains that the Louvre has none of these images, and the only other known print of the Dying Slave is in the Getty Museum in Los Angeles. Some time later, between 1855 and1857, Baldus photographed all the sculptures in the New Louvre as part of his illustrated record of Lefuel's work. Although this documentary work was very valuable in many respects, one should not look to it for the perfection, reverence even, that Michelangelo's masterpiece inspired in him.