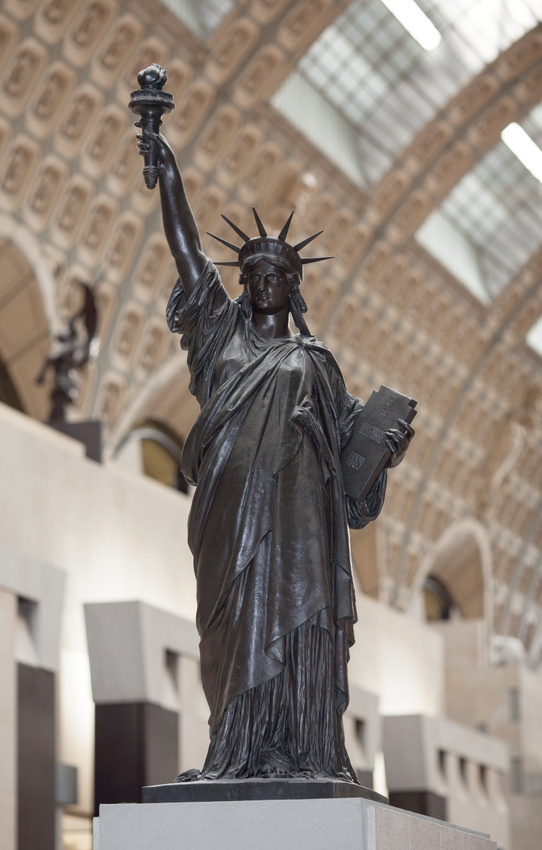 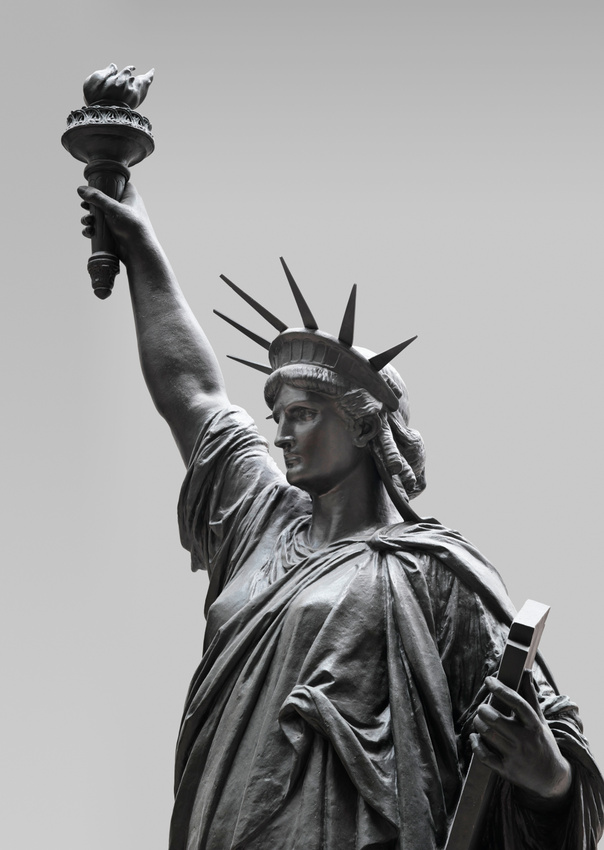 A gift from the French people to the American people for the 100th anniversary of American Independence in 1876, the colossal Statue of Liberty, has become one of the icons of 19th century French sculpture, a statue known throughout the world. This republican memorial celebrating Franco-American friendship was the result of the commitment and tenacity of Edouard Lefebvre de Laboulaye, a former opponent of the Second Empire, and Bartholdi, the ambitious and talented official sculptor. Already, between 1867 and 1869, when the Suez Canal was under construction, Bartholdi had suggested building a huge statue of a woman to serve as a lighthouse at the entrance, based on the mythical Colossus of Rhodes, which certain archaeologists at the time were attempting to recreate. The project was dropped, but would inspire Bartholdi’s first ideas for the statue of Liberty.
He chose a classical iconography, drawn from Greco-Roman Antiquity and from European Neo-Classicism. The simple, austere and compact form, dictated by the constraints of its huge size, was accompanied by meaningful symbols: the flaming torch bringing enlightenment, the tablet evoking the concept of law and the broken chains of servitude, turning the allegory into a highly effective image. The radiant crown was inspired by the monumental figure of Religion designed by Canova for the tomb of Pope Clément XIII (1787-1792) in Rome. Bartholdi thus put forward a peaceful yet powerful image of the shared values of the two republics on either side of the Atlantic, in a western world that was almost entirely ruled by monarchs. Gustave Eiffel produced the internal metal structure. Between 1884 and 1885, the statue could be seen gradually rising up from the foundry in rue de Chazelles, towering above the buildings of the 17th arrondissement in Paris. The inauguration of this colossus was held in New York Harbour on 28 October 1886.
This smaller copy was acquired by the French State during the artist's lifetime, in September 1900, for the Musée du Luxembourg in Paris. The statue was exhibited there until 1906, when, at the request of the sculptor's widow, it was placed in the Luxembourg Gardens. It remained there for over a century before being transferred to the Musée d'Orsay, the natural successor to the Musée du Luxembourg.