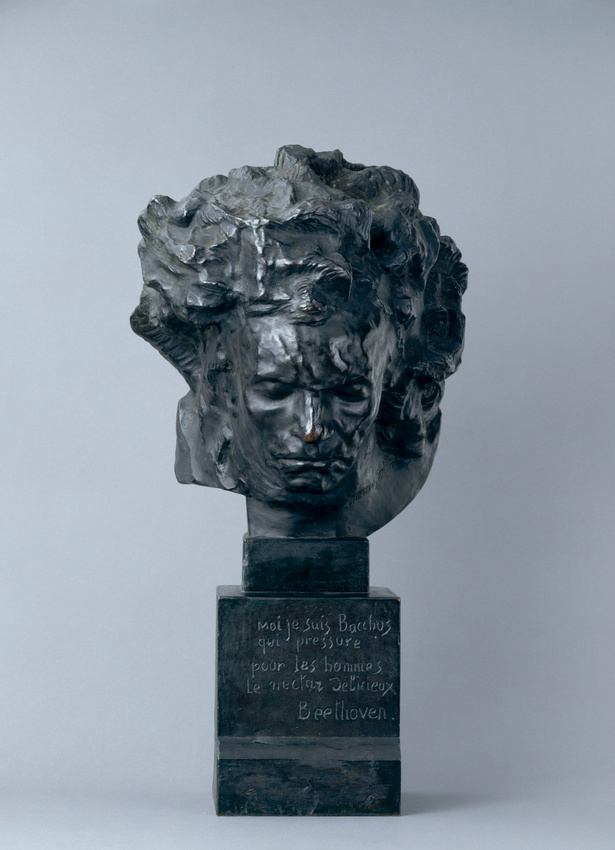 As the incarnation of romantic genius, Beethoven inspired numerous artists. Legend has it that Bourdelle as a young man, leafing through a book on the composer, was struck by his own physical resemblance with him. He began to listen to Beethoven's music and said "... every cry from this deaf man who was listening to God struck straight to my soul. Sweat dripped from Beethoven's forehead on to my bruised heart."
Identifying with his model, he produced many faces of Beethoven, as a musician composes variations on a theme. There are over eighty sculptures of the composer in Bourdelle's oeuvre, without counting the drawings and pastels.
This tormented bust, in which genius seems to be concentrated in the forehead and shock of hair, still has traces of Rodin's influence but simplified in a way which points to the artist's new orientation as can be seen in Head of Apollo, also in the Musée d'Orsay.
The preparatory plaster cast was immensely successful at the Salon de la Société nationale des Beaux-Arts in 1902 which prompted the state to commission a bronze version, the copy shown here. This commission brought Bourdelle, who was already 41, official recognition.
In 1929, shortly before his death, the sculptor created his last Beethoven, called The Pathetic. He declared: "We are two wrestlers who have never been separated. We can clasp hands."