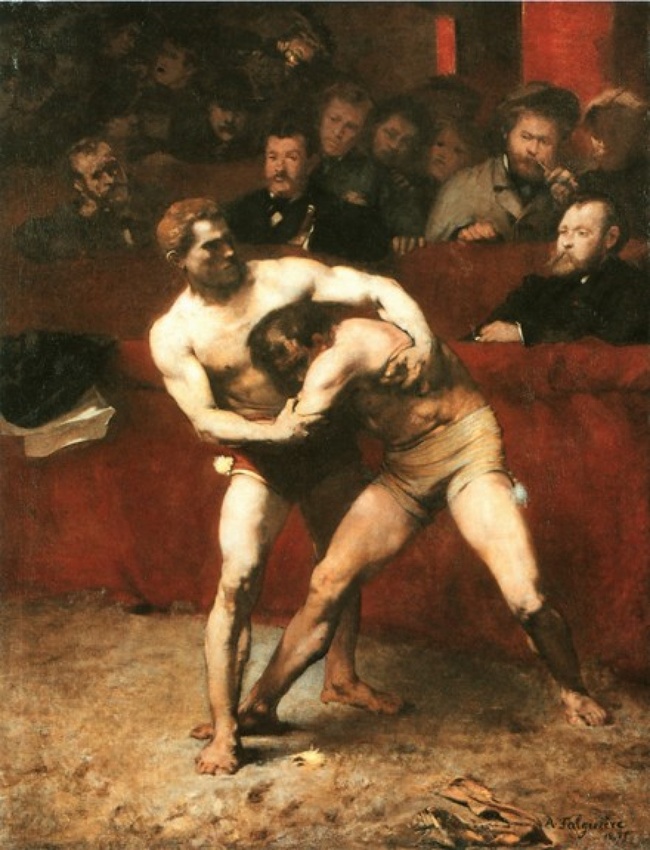 From the 1870s, Alexandre Falguière worked simultaneously as a painter and sculptor. Wrestlers, which was his first large painting, caught the critics' eye and won him a second-class medal at the Salon in 1875. The theme of modern wrestling, fashionable in the Romantic period, had enjoyed a revival in the 1850s. After the Franco-Prussian War of 1870, the figure of the wrestler took on another meaning: his courage was held up as an example to develop the young citizens' fighting spirit.
Critics were divided between those who scorned "the painting of a sculptor" and the larger group of those who recognised that Falguière had the talent of a true painter. The discussion also focused on the painting's realism. Some commentators, who preferred the antique, slated the triviality of the theme, seeing nothing more than banal fairground wrestlers. Defenders of realism, on the other hand, enthused over the modernity of the subject and the lack of idealisation.
From 1876, Falguière nonetheless forsook modern subjects in his painting and turned to historical, mythological, literary or religious themes. If Castagnary is to be believed, the painting "was no more than a response to a dare by a painter faintly infatuated with himself and his talent." Falguière perhaps produced The Wrestlers to prove that he was also a painter.