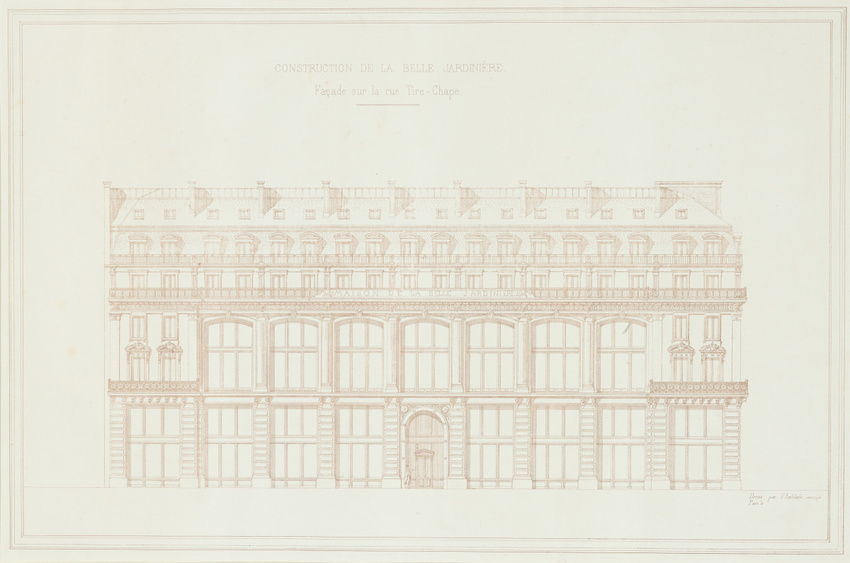 Founded in 1824 on the Île de la Cité, La Belle Jardinière was the first large store in Paris to bring the sales areas, workshops and employees' accommodation all under the same roof. This organisation enabled the brand to offer ready-to-wear clothes to customers of modest means. In 1864, La Belle Jardinière was served with a compulsory purchase order and had to leave the Île de la Cité to make way for the building of the new Hôtel-Dieu hospital. The store then moved near to Pont Neuf, on the Quai de la Mégisserie.
For the new building, the family turned to Henri Blondel, an architect who had done much work around the districts of the Opera and boulevard Saint-Germain, in particular. Construction work on La Belle Jardinière started on 29 May 1866 and finished in December 1867, after having been partly opened in April.
From 1876, work to enlarge the premises became necessary. This began in 1878 and this elevation of the facade can thus be dated before 1878, as there are fewer bays than appear on a lithograph showing the final and current state of the building. It is certainly, therefore, a preparatory drawing by Blondel or his studio, produced between 1864 and 1866. The general idea was to create a central hall lit by a glass roof, around which galleries extended on the various floors. After 1878, the interior would comprise two adjoining, central halls and a distinctly altered facade. The name of La Belle Jardinière disappeared in the 1970s, but the building itself still exists and still retains its commercial role. Today it houses several major retailers.