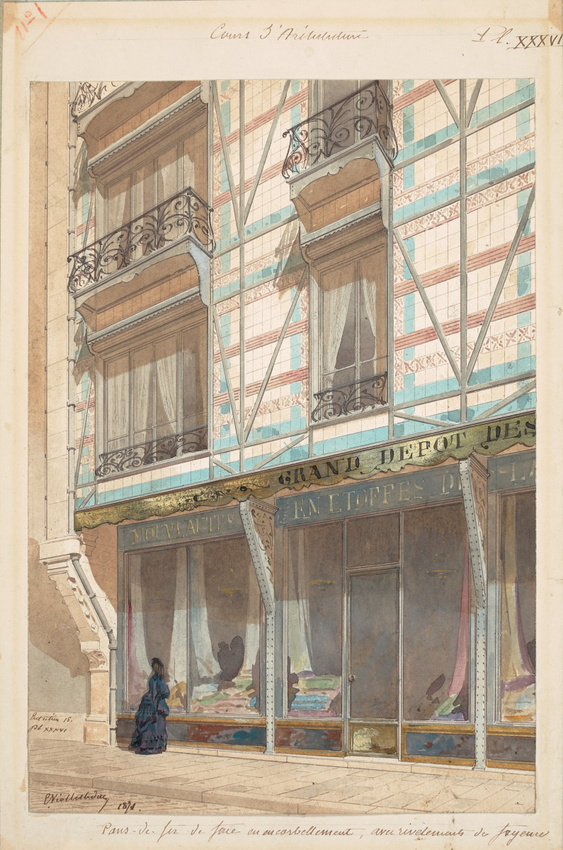 This drawing published by Viollet-le-Duc in 1872 in his famous Discourses on Architecture, has become a legendary image, a true architectural icon. The Entretiens, which appeared from 1863 to 1872, considered to be the foundation of modern architecture, were almost a bible for architects such as Horta, Guimard, Gaudi and Sullivan. In Entretien XVIII (1872), devoted to private architectural projects, Viollet-le-Duc designed a load-bearing framework made entirely of metal, an idea already illustrated in 1871-1872 with the Menier chocolate factory, built by Jules Saulnier in Noisiel.
Viollet-le-Duc's bold innovation was to apply this system to a residential building, and to have the metal structure exposed on the facade, and projecting. A discreet polychromy enhanced the facade and the squares of the cladding, playing on the iron framework and emphasising the structural lines, the fusion of structure and decoration being one of the architect's fundamental ideas. A few months after the fall of the second Empire, he proposed an alternative to Haussmann's aesthetic. The Prefect had in fact been a supporter of a style of town planning where observing a coherent outline and alignment, prohibiting projections, specifying the use of stone and reduced ornamentation, all ensured the uniformity of the city. This design, on the other hand, was a play on volume, colour and materials. Presented as a fantasy, the carefully drawn details of the young woman and the shop window nevertheless give this drawing an intense realism.
When speaking of this study, Viollet-le-Duc affirmed: "I do not claim in any way to present this fragment as a standard design for future apartment buildings or as the architecture of the future, but rather as a study uninfluenced by the methods that modern industry now brings to the art of construction". Subsequently, however, building regulations would break with the principle of alignment and urban regularity. The buildings of the Perret brothers (apartment block at 25 bis, rue Franklin, 1903-1904), of Frantz Jourdain (shop at no. 2 rue de la Samaritaine, 1903-1907), and of Henri Sauvage (apartment block at 26, rue Vavin, 1912-1913), would consolidate the triumph of architectural variety by taking up the ideas of Viollet-le-Duc thirty years later.