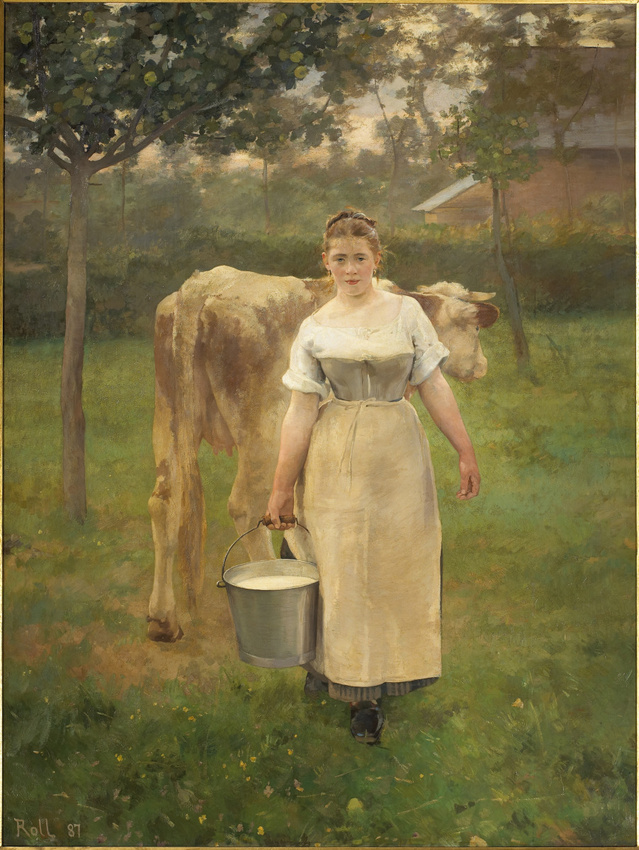 The most successful of the various paintings that Alfred Roll sent to the Salon in the 1880s were imposing figures of women going about their daily work. By including the names of the models in the titles of his paintings, he gave these scenes from everyday life the status of history paintings.
In 1888, the heroine of his offering for the Salon de la Société des Artistes Français was Amanda (Manda) Lamétrie. Born in 1867, and so scarcely twenty when Roll painted her portrait, Manda was a peasant woman from Sainte-Marguerite-sur-Mer, on the Normandy coast, near the artist's summer home, Castel d'Ailly. The young woman ran a farm where she raised a horse and three cows. Roll has put one of the cows, after milking, in the green orchard bordered by a hedge that forms the background of this painting. A neat summary of his model's occupation and surroundings.
Manda Lamétrie forms a monumental figure in the centre of the painting attracting the eye with her light-coloured clothing, particularly the large, pale yellow rectangle of her apron. Her determined expression is no less striking.
Regarded as the most important painting in the exhibition of 1888, this portrait was reproduced in large numbers, which did not stop Manda Lamétrie from going on with her quiet life as a Norman peasant, supplementing her income with shrimp fishing on the coast and keeping an eye on holiday houses, including Castel d'Ailly.