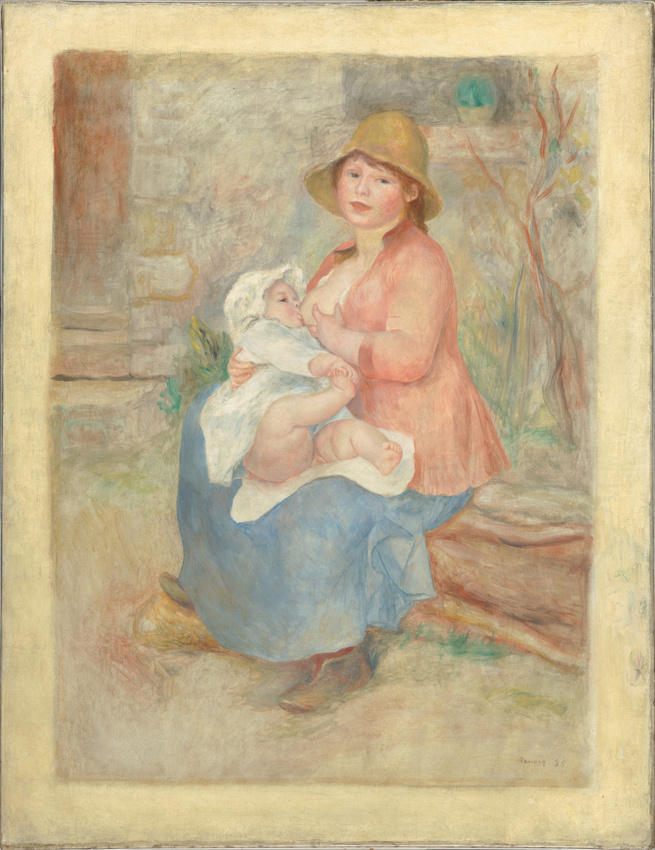 Pierre, Renoir's first son, was born on 21 March 1885. During the following months the painter produced a series of drawings and oil paintings in which Aline, his future wife, is seen feeding the baby. All these works show the characters in the same pose, with the baby Pierre clutching his foot. Given the age of the child, it is probable that this composition was started in Essoyes, Aline's native village, where Renoir first stayed in September-October 1885.
Whereas the figures in this painting are perfectly finished, the background, evoking the outside of a village house, is merely suggested. This version was painted in oil with a very smooth preparation on a fine canvas. The transparent glaze reveals the pencil lines under the figures. The firm contours and the artist's method are typical of Renoir's famous "Ingresque" period.
From the beginning of the 1880s in fact, the painter became intensely interested in drawing. He wanted a clear line, a style well removed from the Bal du moulin de la Galette painted in 1876. This development demonstrates Renoir's admiration for Ingres. It probably also relates to classical Italian traditional painting, from Antiquity to the Renaissance, that the artist chose to interpret, following his stay in Naples in 1881-1882. In choosing a personal theme, that of his new paternity, Renoir was finally offering a "modern" version of a traditional theme - the Madonna and child.