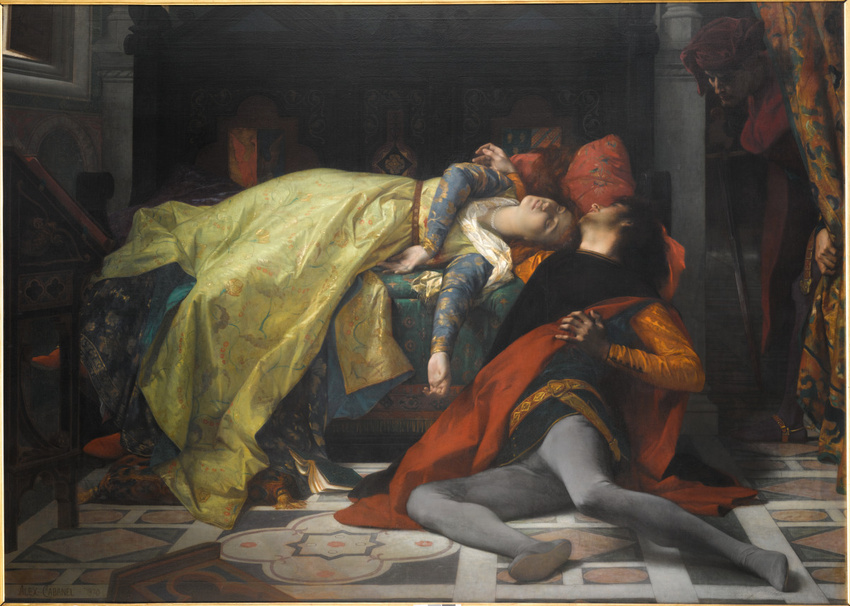 This tragic scene was inspired by an incident that occurred in Rimini in Italy in the mid-thirteenth century and was put into verse by Dante in Canto V of The Divine Comedy. Francesca da Rimini, whose father had forcibly married her to Lanciotto Malatesta, fell in love with her handsome brother-in-law, Paolo. Her husband caught them when they were exchanging their first kiss and killed them with a single swipe of his sword.
This painting exhibits all the typical elements of the classical tradition which Alexandre Cabanel stayed true to. The composition is scholarly, the painting smooth and the drawing precise; care has been taken over the iconographic details. The book that has dropped from Francesca's hands is a reminder that the lovers were reading Lancelot, a story of courtly love, at the time of the murder, while the murderer hidden behind a thick hanging is still clutching his bloody sword.
Cabanel is one of the main representatives of an academic style much appreciated during the Second Empire. His brilliant official career is proof of that. A student at the Villa Medici in Rome, he later won several medals at the Salon, became a lecturer at the School of Fine Arts and a member of the Institute. Yet, the painting was not unanimously recieved when it was exhibited at the Salon in 1870. The object of criticism and caricatures, it was particularly disliked for Paolo's 'displeasing' attitude and the theatrical tone of the work.