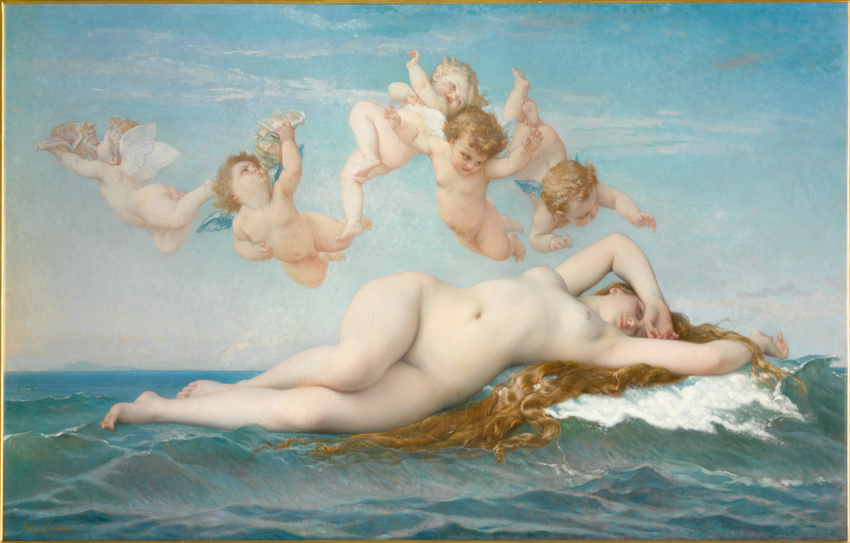 The Birth of Venus was one of the great successes of the 1863 Salon where it was bought by Napoleon III for his private collection. Cabanel, a painter who received numerous awards throughout his career, at that time played an important role in teaching at the Ecole des Beaux-Arts and in running the Salon. Typical of his virtuoso technique, this painting is a perfect example of the popular and official artistic taste of the period.
In the eclectic spirit of the Second Empire, he combines references to Ingres with an 18th century style of painting.
Cabanel took as his subject a famous episode from classical mythology when Venus is born of sea-foam and carried ashore. This theme, very popular in the 19th century, provided some artists with the opportunity to introduce eroticism without offending public morality, under the pretext of representing a classical subject. For Cabanel, the mythological theme is indeed a pretext for the portrayal of a nude figure, which, though idealised, is nonetheless depicted in a lascivious pose.
Emile Zola denounced this ambiguity: "The goddess, drowned in a sea of milk, resembles a delicious courtesan, but not of flesh and blood – that would be indecent – but made of a sort of pink and white marzipan". The writer was thus deploring the use of a pale, smooth and opalescent palette.
That same year, Edouard Manet's Olympia caused a scandal. The subject of the two paintings is identical: a reclining nude. But the calm assurance with which Manet's subject stares back at the viewer seems much more provocative than the languid pose of Cabanel's Venus.