The parting of Sir Lancelot and Queen Guinevere 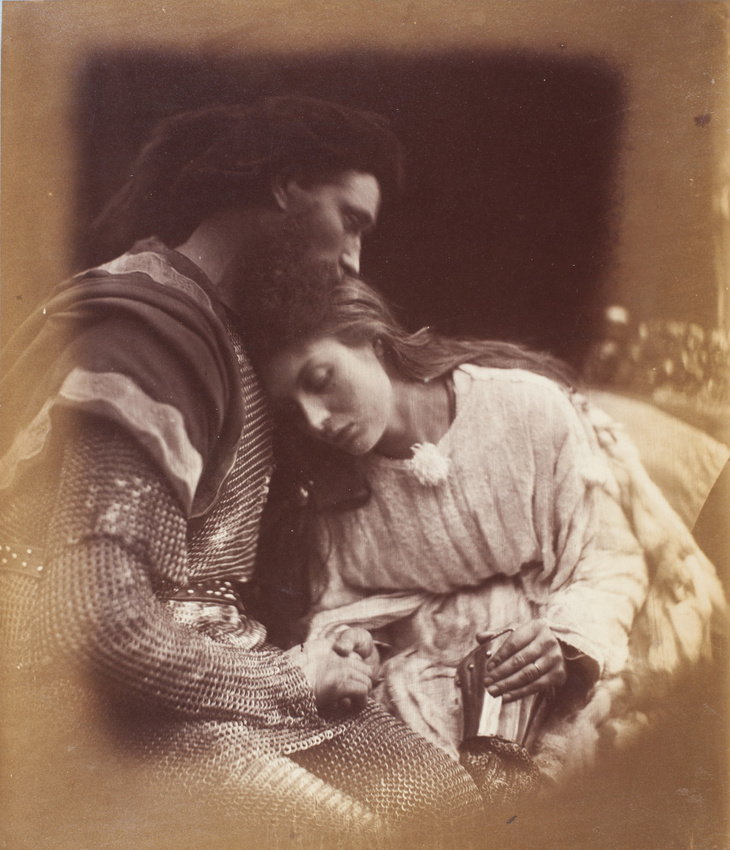 In 1874, the writer Alfred Lord Tennyson asked his friend and neighbour from the Isle of Wight, Julia Margaret Cameron, to illustrate one of his works with her photographs. The work was The Idylls of the King, a collection of epic poems inspired by the Arthurian legends.
For more than ten years, Julia Cameron had found inspiration for her work in the colourful imagery of Tennyson's poetry. She was therefore delighted with this commission, and threw herself into the project for more than three months. Friends, domestic staff and house guests were prevailed upon to pose in front of the camera in hired costumes.
She took many shots partly because of her desire to take the perfect shot and partly because, with an exposure time of between three and seven minutes, there was always a chance of unexpected technical hitches. In the end, more than two hundred images were taken for the final twelve illustrations. The Parting of Lancelot and Guinevere alone required forty-two shots.
In these scenes, Julia Cameron was very close to the Pre-Raphaelites. Their influence can be seen, not only in the choice of subjects and the importance given to the human figure, but also in the blend of mysticism, tenderness and sensuality. She was the first to take photography into a realm from which, in the early days, it had seemed excluded: the realm of imagination, fiction and ideal beauty. It was a typically Anglo-Saxon trend, with far-reaching consequences. It opened the way not only for the international pictorialist movement at the end of the century, but also for the Surrealist and abstract photography of the 1920s.