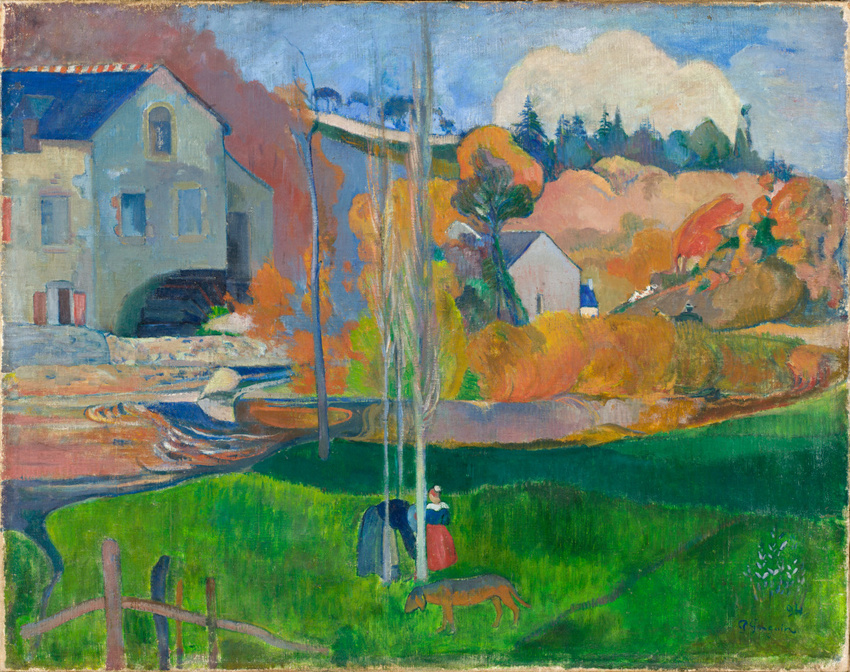 Just like Cézanne and Van Gogh, Gauguin was convinced that painting should not be limited to reproducing what the eye saw. That is why, just like Odilon Redon who found it too "lowbrow", Gauguin judged Impressionist painting severely, stating that "there is no thought in it". For him, painting meant searching beyond appearances, by giving less depth to the image, for a more complete and considered reality, a spiritual reality that he called "abstraction".
After his second stay in Brittany in 1888, Gauguin began to simplify things, and his objective was no longer the quest for changing light and its ephemeral variations. When he returned from Polynesia, coming back to Brittany in 1894, he painted this Moulin David, which reveals the influence of his research in Tahiti. Here nothing moves, everything is stable, unified and definitive.
The drawing, synthetically combining the verticals of the houses and trees in the foreground with the winding, undulating lines of the meadow, the stream and even of the fence, produces a mythical evocation of a primitive, Eden-like setting through this Breton motif. The oblong shapes of the hill respond to the "mounds" of cloud, simplified like a child's drawing.
Across each of these distinct areas are layers of colour, both intense – bright green and emerald green, orange and cobalt blue – and very arbitrary in their imitation of the real.
The brushwork is light, striated on the weave of a rough canvas, but does not produce any relief; no colour is shaded off to indicate a shadow, and there is nothing to suggest any variation in texture.