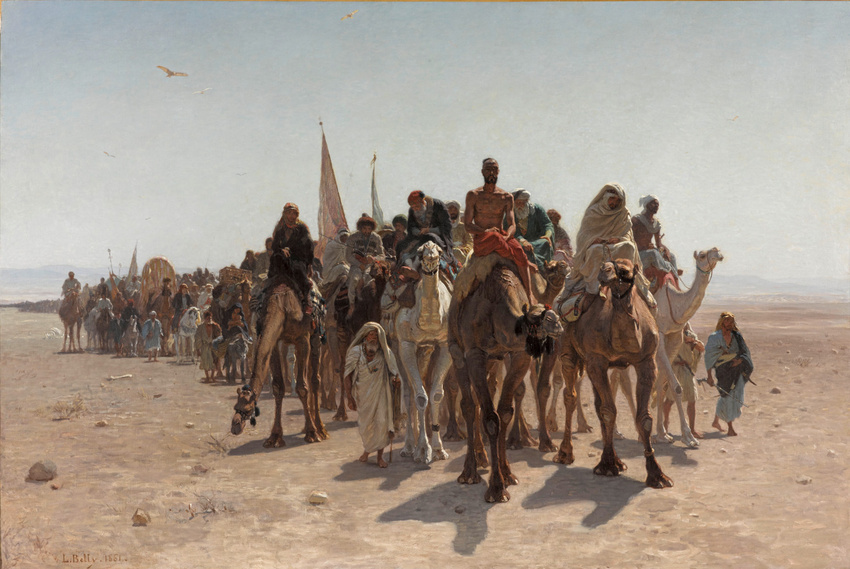 For this work, regarded, from the moment it was presented, to be a masterpiece of Orientalist painting, Belly chose to present an ambitious subject on a canvas of unusually large size. It depicts a long caravan crossing the desert, making its way towards Mecca, Islam's holiest city and place of pilgrimage for all Muslims.
At the 1861 Salon, Belly received a first class medal for his Pilgrims, the highest award. The public particularly liked the bold effect produced by the long procession as it advances towards the spectator. In fact, one critic declared that as he "came back into the Salon, it seemed as if every visitor had become part of the caravan". Nevertheless, there were some who disagreed. In the Gazette des Beaux-arts, one observer reproached Belly for not having respected certain conventions: "In Pilgrims going to Mecca, the group is perhaps too compact, and the camels take up a disproportionate amount of space compared with the human figure".
In this painting, the artist introduces a very discreet ecumenical dimension to his work. On the left, he portrays a group of three people: a man walking alongside a woman and her child on a donkey. It is a striking reference to the widely used motif in painting, of the "flight to Egypt" of Mary, Joseph and Jesus. Through this association, Belly is indicating his commitment to the idea that, beyond the divisions, there exists a universal religion, one faith and one God.