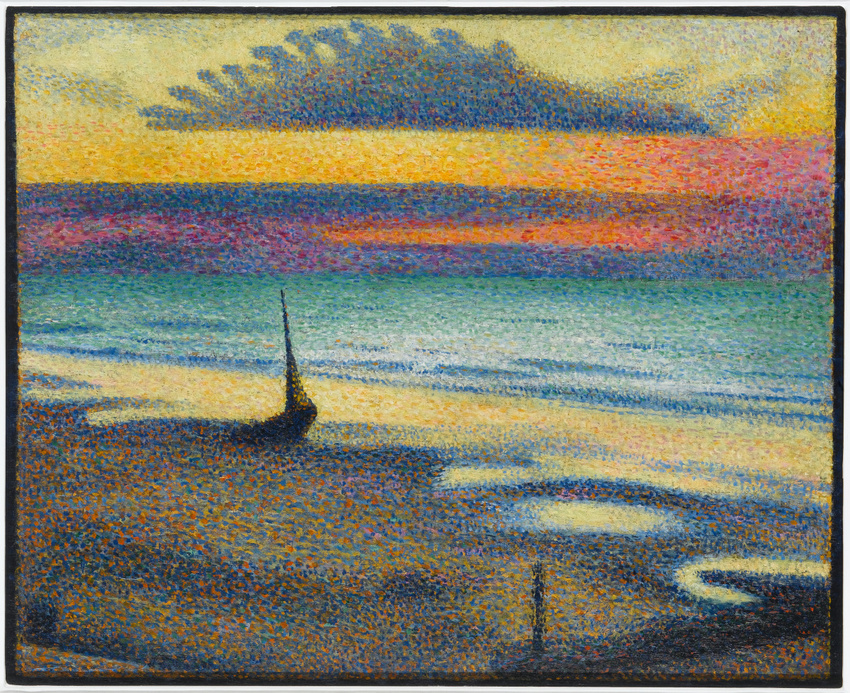 In the second half of the 1880s, after Georges Seurat and other Neo-Impressionists had exhibited their paintings at the Salon des XX in Brussels, several Belgian artists were converted to pointillism and the optical mixture of colours.
The painter George Lemman, then scarcely twenty, was among these enthusiasts. For about a decade, gradually loosening Seurat's theories, he developed an original technique, applied more particularly to portraits and landscapes. After 1891, under the influence of his fellow countryman Henri Van de Velde, his paintings showed an "Art Nouveau" stylisation of which the Beach at Heist is a remarkable example.
The tight network of tiny round or oval dots arranged horizontally on the canvas enabled him to create distinct coloured zones clearly separated by a line of complementary colours. These shapes took on weird, anti-naturalist contours such as the huge bluish cloud which seems to invade the sky.
The only sign of human life in this nocturnal landscape is the abandoned boat, painted in purple strokes against a background dominated by yellow and orange. The exacerbation of the colours and synthetic forms was part of the development of the Symbolist movement which opened a new era in the Franco-Belgian art community.