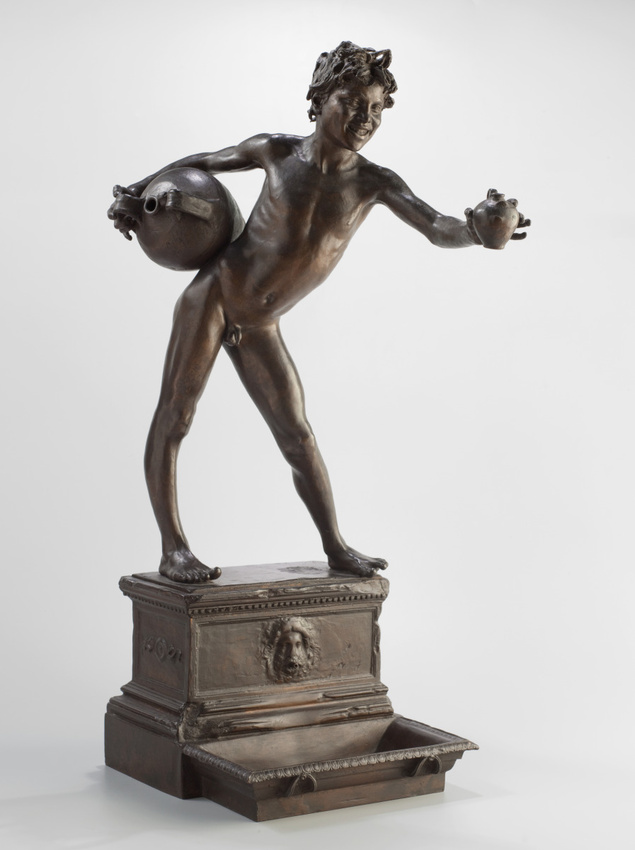 The Italian Gemito exhibited a sculpture of a young fisherboy at the Salon in Paris in 1877 (Il Pescatore, bronze in Florence, Museo Nazionale del Bargello). The success of this work encouraged the artist to continue in this genre, giving his models more expressive poses. Here, the swaying hips of this scugnizzo – a nickname given to children in Naples – and his seductive smile and gesture give him a clearly erotic charge. The sculptor is certainly presenting us with a realistic street scene: a lively dialogue between a vendor of cool water and his thirsty client, unseen. But the nudity of the child along with the pedestal in the shape of a water fountain, decorated with a mascaron, place this scene in Roman Antiquity, allowing the artist to justify its eroticism.
Gemito created this statuette in Naples, his home town, when he returned after a long stay in Paris. A first version, modestly provided with a pair of shorts, was destined for the King of Naples, Francesco II, in exile in the French capital.
Gemito was one of the sculptors in the second half of the 19th century known as the "Neo-Florentines" who took their inspiration from the Italian Renaissance, particularly from the sculptures of Verrocchio, Donatello and Giambologna. This work follows in the tradition of the Fisherman dancing the Tarantella by Francisque Duret (Louvre) and of the Young Neapolitan Fisherboy by Rude (Louvre). But it also draws on ancient Roman statuary - the numerous bronze fauns with slender bodies discovered in the ruins of the luxury villas of Pompeii and Herculaneum.