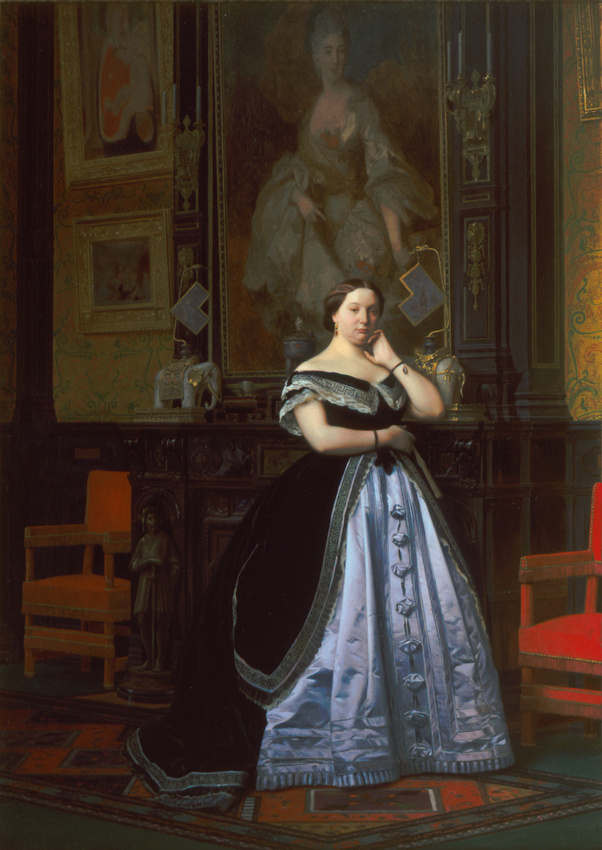 The baroness Charlotte de Rothschild (1825-1899), who married her cousin Nathaniel (1812-1870) in 1842, was brought up surrounded by the artists her parents received and so went on to become a welcome figure in the world of artists and musicians. In 1835, Frederic Chopin, her piano teacher, dedicated one of his two opus 69 waltzes to her. However, she was more interested in visual arts than music and became a watercolorist, participating regularly at the Salon, and later in the exhibitions of the Société des Aquarellistes. The Baroness was also a remarkable collector with a taste for a variety of styles, as is suggested here by the eclectic and luxurious décor which surrounds her.
The portrait, painted by Gérôme in 1866, pays homage to Ingres' 1848 portrait of the model's mother, Betty (1805-1886), which is housed in a private collection. Gerôme used a similar technique to Ingres; smooth and precise with sumptuous effects such as the marbled reflections of the dress, and he also borrowed the Ingres' positioning of the hand, supporting the chin.
Female portraits by Gérôme are rare; this is the first to enter the Musée d'Orsay collections, and only the third to be recorded in the French national collections. As well as representing the baroness Nathaniel de Rothschild, one of the mid-19th century's most renowned figures, the portrait also embodies the atmosphere of the Parisian society of the age.