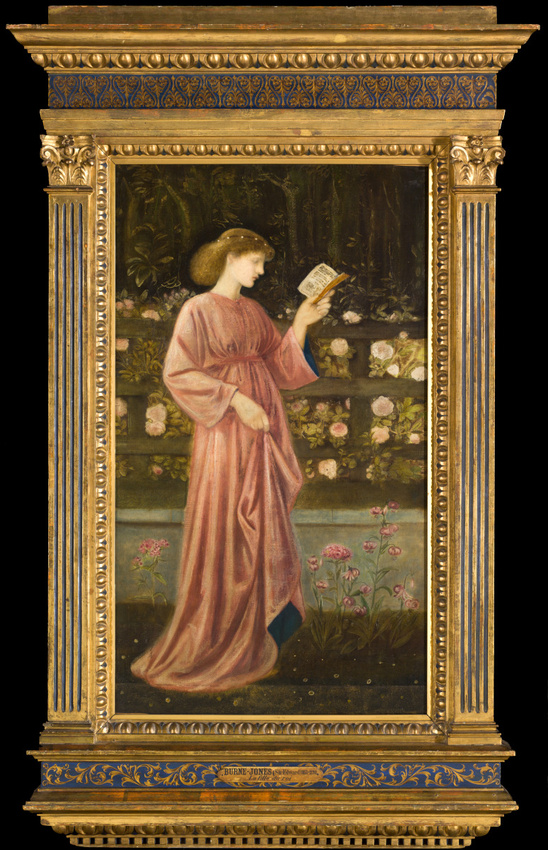 This work was part of a decorative ensemble commissioned from Burne-Jones by the watercolourist Miles Birket Foster (1825-1899) and depicts the legend of Saint George and the dragon. The story of Saint George had been widely circulated since the Middle Ages, and tells the tale of Princess Sabra who is chosen as the next victim to be sacrificed to the monster. Georges de Lydda, a Christian nobleman and officer in the Roman army, saves her from the dragon's claws. Her father, the king, and all his vassals, then convert to Christianity.
Imbued with the chivalrous ideal, this legend presenting the future patron saint of England was a favourite subject of the English Pre-Raphaelites. Like many 19th century artists, they were fascinated by the Middle Ages, which they considered to be an era of great spirituality. Perhaps in this work Burne-Jones is praising the faith and ideals seen as a bastion against modern industrial civilisation, against the threats represented by machines and mercantilism.
Here, the painter focuses only on the figure of Princess Sabra. The full-length image of the androgynous woman is painted against a background of flowers and trees, evoking a medieval tapestry, and adding a decorative character to the work.