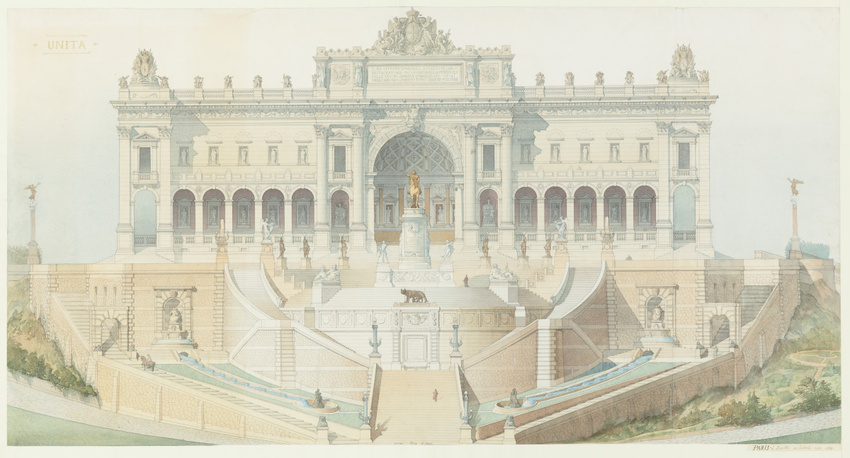 In 1880, the fledgling Italian State launched a competition to erect a monument in honour of Victor Emmanuel II, the first king of Italy, who had died in 1878. Eight French architects took part in the first selection process, which was won by the young Henri Paul Nénot, then a student at the Villa Medici. But public opinion was opposed to this choice, and in view of these nationalist sentiments, the government relaunched the competition in 1883. Boitte responded with this design, offering a veritable lesson in Italian architecture, a synthesis of his Roman studies.
The monumental staircase with its double ramp recalls the Farnese Palace in Caprarola, designed by the Italian architect Vignole (1507-1573) and not to be confused with the Farnese Palace in Rome. The huge central loggia was inspired by the work of Bramante (1444-1514) in the Vatican, whereas the rustication recalls Bernini (1598-1680). These references, evidence of Boitte's unswerving affection for Italy, were also certainly intended to play to the emotions of the jury, who were anxious that this monument should symbolise the spirit of the new Italian nation. In the end, the building of this structure was entrusted to the Italian architect Giuseppe Sacconi (1854-1905).