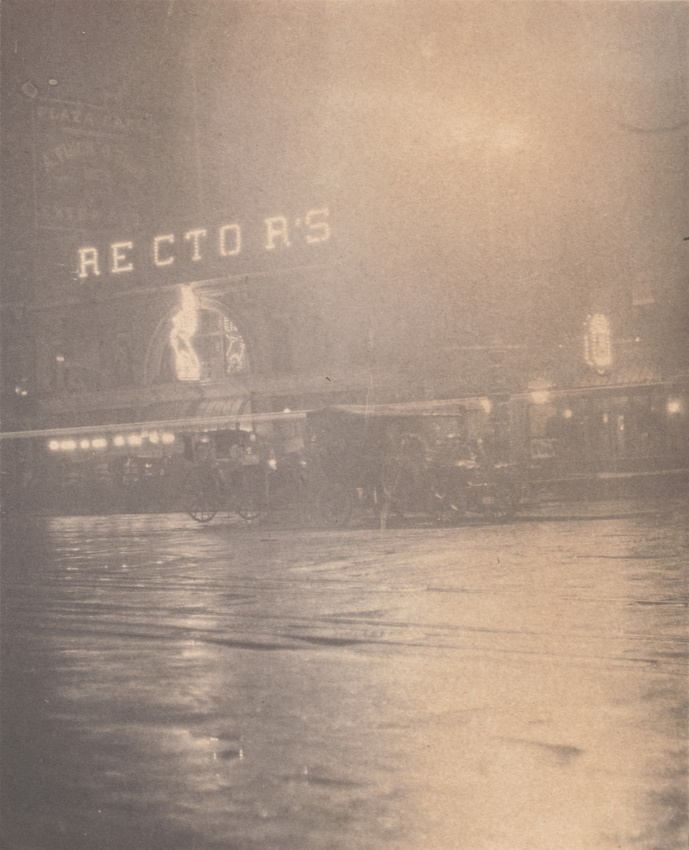 It was in 1908, after meeting the leader of the American pictorialist movement Photo-Secession, Alfred Stieglitz (1864-1946), that Paul Haviland became a keen photographer. His early work reflects this influence: indistinct figures, with hazy outlines, looming out of the semidarkness, marked by Japanism and Whistler's aesthetic.
In summer 1909, Havilland decided to photograph New York by night. His work traces his direct descent from his elders, the Englishman Paul Marston (1864-1942), the author of London by Gaslight (1896) and Stieglitz, who took photographs of the American metropolis as early as 1897.
These photographs are a technical challenge and show Haviland's interest in electric lighting, a modernist subject par excellence. In most cases, as here, he aimed the camera directly at the light. In this view of the nightclub Rector's he tried to catch the halo around the street lights as well as the reflections on the wet bitumen. The use of a portable camera enabled him to frame the shot in an unusual way, leaving the entire lower half of the picture to the road. The rails of the tramway crossing the street at a slight angle add a dynamic note.
The series of night views of New York was the beginning of Haviland's shift to an aesthetic that was at once rougher, closer to the snapshot, and more powerfully geometrical. It finds its full expression in views of the streets, rooftops and port of New York in 1910-1914.