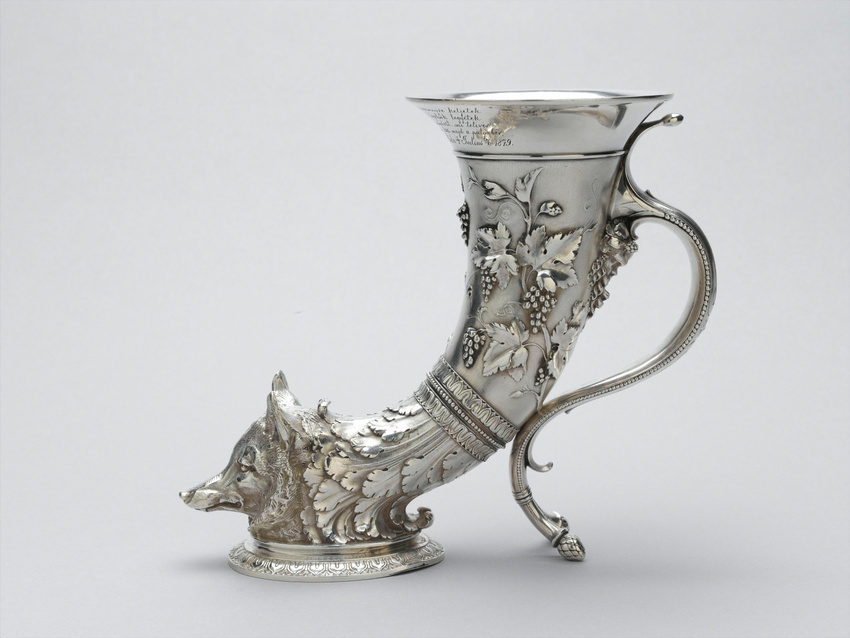 Taking an antique shape, the rhyton (from the Greek rhuton, from rhein meaning to flow) is a drinking cup in the form of a horn or animal's head, which, while still somewhat rare, became popular again from the end of the 17th century in the decorative arts in Europe.
From the long Hungarian inscription inscribed on its neck, this rhyton commemorates Baron Bêla Wenckheim (1811-1879). Prime Minister of Hungary on his death, he was a liberal and a figurehead of the Hungarian Reform Movement. The original fox's head is an allusion to the engraved text, which sings the praises and pleasures of hunting. In a naturalist repertoire, the vines and bunches of grapes enliven the vase with a Bacchic theme.
This is far from being an object to use; this rhyton would have been a hunting trophy or prize for racing. That someone should come to Paris for such an object underlines how French taste set the tone then and how this had spread throughout the whole of Europe at the time.
The composition of this object must without any doubt be attributed to Louis-Constant Sévin. A major figure in 19th century industrial arts, he worked in perfect synthesis with the Maison Barbedienne. The chasing was undoubtedly entrusted to Désiré Attarge (1820-1878). Barbedienne himself sang the praises of his employee, "under whose skilful and intelligent hand the metal softened and reformed into delicate shapes".
Barbedienne, Sévin and Attarge formed one of the great partnerships for bronze artworks in France in the 19th century. This rhyton demonstrates their wonderful inventiveness and sensitivity, particularly in the field of gold and silver work.