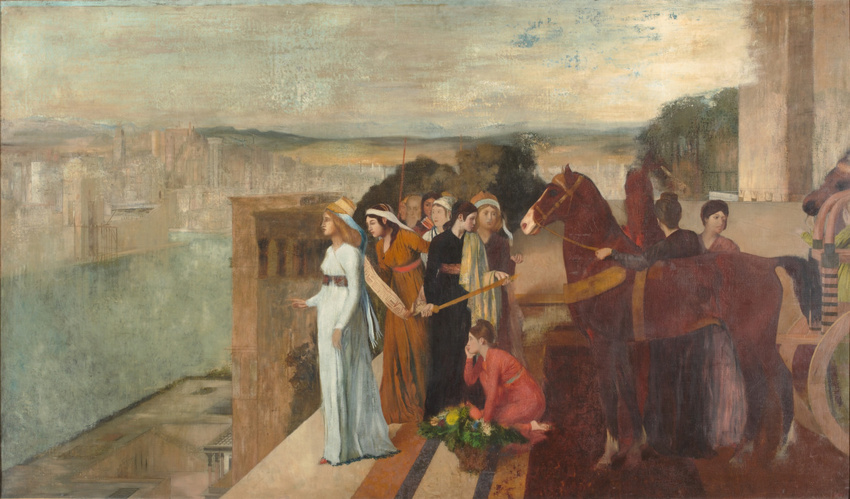 Started about 1860, Semiramis Building Babylon stayed in Degas' studio until his death. The painting shows a mythological scene: Semiramis, the Queen of Assyria and the founder of Babylon, is standing on one of the banks of the Euphrates River contemplating the construction of the city which became one of the Seven Wonders of the World.
Some details in the composition suggest that Degas carried out historical research for it. The chariot on the far right and the queen's hairstyle seem to be iconographic elements taken from a study of Assyrian reliefs which had recently arrived in the Louvre. Several drawings now in the Graphic Arts Department indicate Degas' preparatory work for this history painting.
In accordance with the neoclassical academic tradition, the figures were drawn separately, at first nude, and then draped with a care reminiscent of the masters of the Italian Renaissance. It was once thought that Degas had taken his inspiration from Rossini's opera on the theme, premiered in Paris in July 1860. The paintings of Piero della Francesco that Degas had seen in Arezzo in the late 1850s are a more likely influence, as if the masters of the past held the key to the salvation of history painting.
Indeed, Degas executed several history paintings, including this one, between 1860 and 1865, some probably on the prompting of Gustave Moreau who was a close friend at the time. Querying the relevance of this genre in contemporary painting, he has here tried to combine historic reconstitution based on copies of fragments with a plastic approach that assimilates the pictorial codes learnt during his training under Ingres.