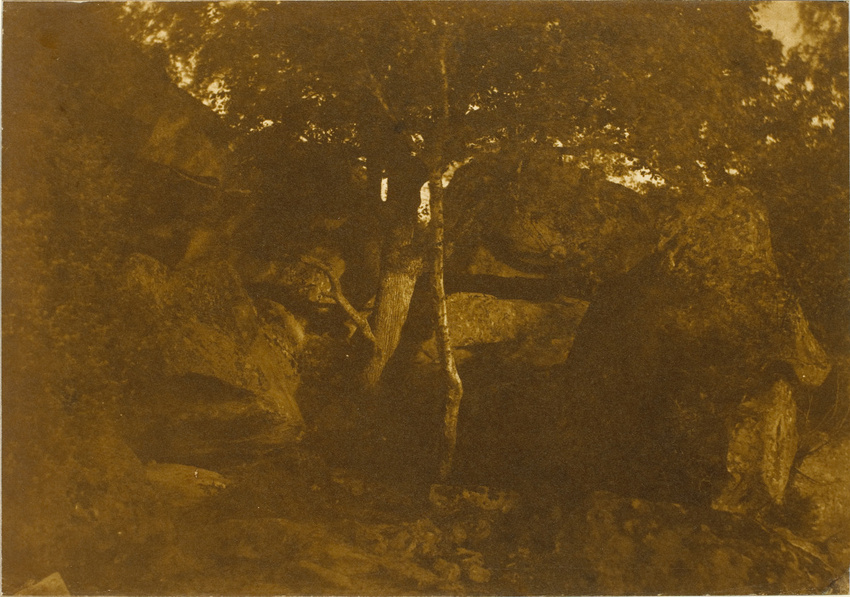 Although it has no signature or stamp, this photograph can be attributed to Gustave Le Gray because of its format, tonality and provenance. It came from André Jammes's collection and was part of a set of three views of Fontainebleau, at least one of which bore Le Gray's stamp. These three images once belonged to another great French photographer of the 1850s, Charles Nègre (1820-1880).
During the 1850s, Le Gray roamed the forest of Fontainebleau, taking photographs first with paper negatives then, probably from about 1855, with collodion glass negatives. Until 1860 he presented landscapes of Fontainebleau and tree studies in various photographic exhibitions in Paris and London. Although undeniably poetic, they were technical feats. In the book he published in 1851, Le Gray explained that "vegetation and green objects in general require a much longer time," as much as twenty minutes' exposure.
Le Gray almost always tried to catch the subtle play of sunshine in the foliage and on tree trunks. In 1855, during the first exhibition of the Société française de photographie, the critic Paul Périer found one of these nature studies "remarkable for the subtlety of its light and shade effects." Achieving a fragile balance between hazy areas and sharp detail, this image indeed seems to be a perfect example of the "sacrifice of the secondary parts" that Le Gray advocated at the time.