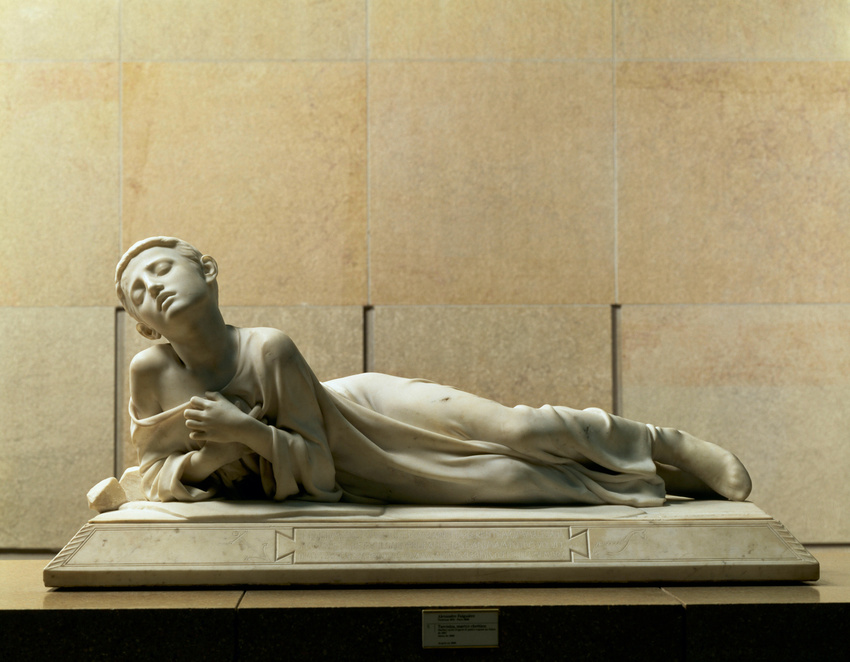 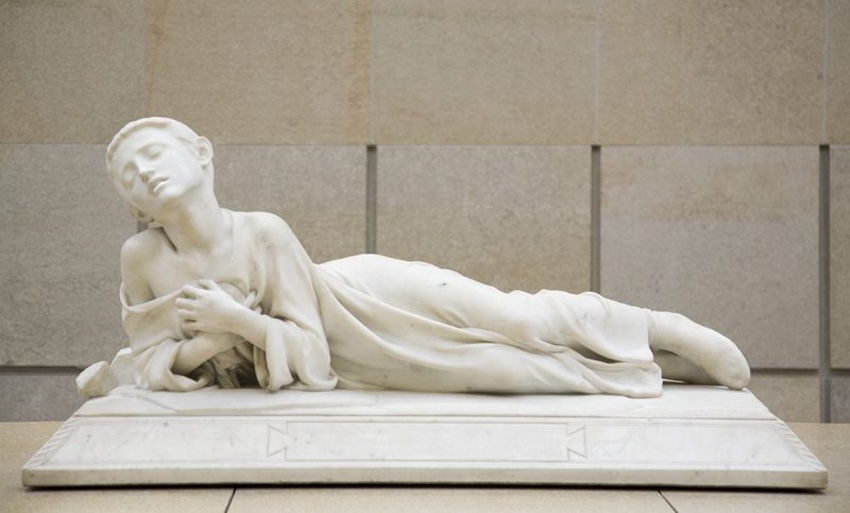 Falguière became famous in 1864, when he presented his Winner of the Cock Fight (Musée d'Orsay) at the Salon. Four years later, the warm reception given to Tarcisius confirmed this success, and the work was bought by the State.
Tarcisius was a young, Christian martyr who probably lived in the third century in the Roman Empire, and who died trying to protect the sacraments he was carrying. Falguière chose the moment when, having just swallowed the sacraments, the boy is beaten to death by pagans. His epitaph, written by Pope Damasus and which can be seen in the catacombs of San Callisto in Rome, is retranscribed on the base of the work. The Christian church made him the patron saint of altar boys. It was a novel by Cardinal Wiseman published in 1854, Fabiola or the Church of the Catacombs, that inspired Falguière to take this subject, not without a certain commercial motive, for, as the critic Edmond About wrote, the work "would be reduced and reproduced in thousands of copies, and mothers would give it to their sons on the day of their first communion".
For this statue, the sculptor had a young boy pose nude for a photographer. He added the drapery, as well as the stones at the back, suggesting the boy had been stoned to death. Additionally, the work has references to the Neo-Classical martyrs like the young Bara painted by Jacques-Louis David in 1794 (Avignon, Musée Calvet). Finally, in Rome, in the church of San Lorenzo fuori le Mura (Saint Lawrence Outside the Walls) one can see an illusionist statue of Tarcisius, which is very close to this marble, but with more emphasis on redemptive suffering.
Falguière here offers us a curious blend of ambiguous sensuality and Christian morality, of Academic art and Realism. At the time, the work was very successful: there were many editions of this statuette, as well as engravings and photographs. The writer Roger Peyrefitte was very impressed by it: in his novel Special Friendships (1943), he placed it in a Catholic college, where it was used for the edification of young pupils.